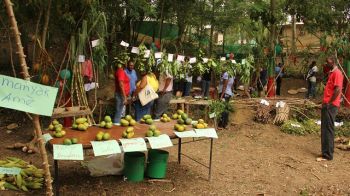 We, the members of CLOC-Via Campesina Haiti, accompanied by other CLOC-Via Campesina member organisations from several Latin American countries, have held a two day meeting, together with other Haitian Social Movement organisations from across the country, at the National Training Centre for Peasant Leaders in Papaye. The theme of our assembly was Tè, Semans Natif Natal, Anviwónman, se chemen lavi (Land, Native Seeds, Environment: The Path to Life).

At the international level

We discussed the landgrabbing that is being carried out by the imperialist countries through the actions of their multinationals, particularly in Africa and Latin America. What we are witnessing is a real process of recolonisation. More than 50 million hectares have changed hands; more than 100 billion dollars US have already been spent on buying up land, and, in the bank accounts of more than 120 financial groups, more than 100 billion dollars are available for landgrabbing.

The land that has been grabbed is mainly intended for the production of agro-fuels and animal feed crops. More than 13 million hectares of forest land disappear each year. In South America, a hectare of the Amazonian forest disappears every second. In order to make more and more money, the multinationals are destroying the planet – and at the same time claiming to put forward solutions to the climate crisis. The medicine is killing the patient.

The climate crisis has become a veritable catastrophe. Reports from climate experts clearly indicate the very serious threat to the planet that would result from a failure on the part of the industrialised countries to put a brake on  atmospheric pollution from the greenhouse gases that are causing global warming. The Green Economy policies adopted at the Rio+20 Conference are an attempt by the capitalist countries to save the capitalist system, in the wake of the failure of neo-liberal policies.

The goal of the Green Economy is to commodify all of the natural resources and all of the common goods of humanity. The multinationals want to destroy the natural resources of the impoverished countries: land, forests, seeds, water, mines, and genetic resources in general. The life of the population is of little importance. The thing that matters is profit, every day more profit.

At the Haitian national level

What we see in Haiti with regard to landgrabbing is catastrophic. The Haitian government is carrying out a policy of eliminating the peasant class.  At the time that he took over the reins of government, the President of the country announced that: Haiti is open for business. It was a way to tell the multinationals that the country was for sale.

Indeed, the government is engaged in handing over farmland to the multinationals – for  free trade zones; for plantations, particularly of jatropha; for large-scale tourism projects. The government is joining with the multinationals and with Haitian businessmen in order to expel the peasants from their land – in the North-East, in the South (Ile à Vache), in the Artibonite, in St-Raphael, Quartier Morin (Nord), Leogane (West). Across the country, peasants are being imprisoned or persecuted.

The peasants are calling for agrarian reform; the government is carrying out land reform. According to the statements made by the Secretary of State for Plant Production during a conference at Hinche in the centre of the country, the government is going to chase the peasants off land belonging to the State, so as to be able to grant this land to large entrepreneurs. The Haitian government is planning to make changes to the mission of the National Institute for Agrarian Reform (INARA).

The government has already signed many contracts for mining exploration and exploitation. Unless the population mobilises to oppose them, these projects are going to do away with the country’s environment.

There is an international plot to take seeds away from peasant families. The plan is to get rid of peasant seeds in order to make way for the seeds from agro-toxic multinationals, like Monsanto, that are pushing for the GMOs which are destroying local seeds. Ten multinationals control the international seed market, a market of more than 30 billion dollars US. There is a real campaign in Latin America to pass laws which will deprive peasants of their right to select, save, and plant their own seeds – as is happening at the present time in the Dominican Republic.

As a result of our reflections, we arrived at the following decisions:

For CLOC-La Via Campesina Haiti