Statement by  Farmworker Association of Florida (FWAF) in Solidarity with the MST in Brazil: 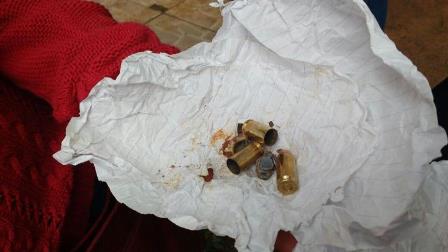 “We strongly condemn the police and military action at the National School Florestan Fernandes in Guararema, Brazil. Regardless of the motives used by the agents, the invasion violated basic democratic principles, and risked the well-being of students, professors, staff, and their families housed and studying at the institution. We demand an end to these acts of intimidation and violence, and that the Brazilian government respect the work that the MST and all the other organizations do at the school.”

Just days after four members of a U.S. delegation to Guararema, Sao Paulo, Brazil returned safely to the U.S., there was a civil and military attack on the Escola Nacional Florestan Fernandes (ENFF), where the members of the delegation had been staying and meeting.  The raid of the school was carried out without a warrant and without provocation.  Several people were detained as police and soldiers climbed over the reception gate at the school, waved their weapons and fired rounds of live ammunition.

The school is an arm of the Brazilian Landless Workers Movement or the MST (Movimento dos Trabalhadores Sem Terra), considered the largest social movement in Latin America with some 1.5 million members in 23 of Brazil’s 26 states.  As a member of La Via Campesina along with the MST, the Farmworker Association of Florida stands in solidarity with our Brothers and Sisters who are on the frontlines of the resistance movement for land reform and grassroots food sovereignty.   Earlier this year, the MST sent a representative to the U.S. to spend three months with FWAF in an exchange program which focused on agroecology, food sovereignty and grassroots resistance.

The recent delegation to the ENFF School included two Farmworker Association staff members -Elvira Carvajal and Antonio Tovar, and two allies, Preston Peck of Toxic Free North Carolina and Kathia Ramirez of the Farmworker Support Committee (CATA) – who traveled to Guararema for an “Agrotoxicos” meeting with representatives from Brazil, Argentina and Paraguay.  The goal of meeting was to share information and collaborate around issues of the harmful effects of toxic agricultural chemicals impacting human health, the environment, food soverignty and human rights.  This meeting occurred just days after the Monsanto Tribunal in the Hague, which brought a case of human rights violations against people and communities around the world by the transnational agro-chemical giant corporation Monsanto.

The Escola Nacional is a symbol of solidarity to the rural movements in Brazil that advocate for the democratization of education and land.  Hundreds of Brazilian and international intellectuals, teachers and artists have regularly contributed lectures, courses and teaching materials to the school.

What you can do?

Plans are being made to mobilize support in the U.S. in opposition to the Brazilian government’s heavy-handed and illegal tactics.  Follow us on facebook for information on upcoming actions and responses you can take to express your support for the ENFF and the MST and to oppose these violent actions by the government of Brazil.