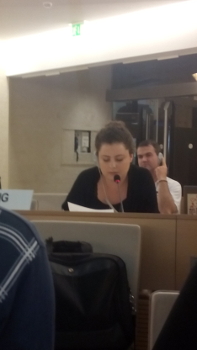 At the ongoing negotiations in Geneva, of the Open Ended Inter Governmental Working Group (OEIWG) at United Nations, Julia Fernandes on behalf of International Association of Democratic Lawyers and MAB (a grassroots national organization from Brasil) and La Via Campesina spoke about the urgent need to have a Binding Treaty to hold TNCs accountable for human rights violations.

Here is the text of her speech.

We speak on behalf of International Association of Democratic Lawyers and MAB, a grassroots national organization from Brasil, struggling in defense of the rights of communities affected by dams and for a peoples energy project. MAB is part of the Via Campesina International.

In the name of profit, Transnational companies misappropriate natural resources, pollute the soil, water, food and air. The rights of affected people are not recognized, and their human rights are violated,  legitimate people and organizations who dare to oppose them are criminalised. They use in many cases even the physical elimination of human rights defenders. Impunity for businesses and governments, leads to a naturalization of this process of violation. The binding treaty will be a tool for the struggles of the populations who defend their rights in different territories.

The affected people have many difficulties in accessing justice and remedies. For example, in Brazil, we have the security mandate which guarantees that projects considered of national interest are not interrupted not even in case of investigation and proofs of human rights violations, which denies the primacy of human rights. Another difficulty is that the affected must prove their status of affected person and their losses, which demonstrates the need for a broad and inclusive definition of the concept of affected person. With the current coup in Brazil, there are even greater difficulties of implementing policies in favor of those affected and ensure access to justice because there is a close relationship between private interests and the illegitimate government.

In this long process of building of our organizations, our resistance, we have accumulated several lessons and challenges These include:

We want to affirm here that we will continue struggling,to defend our rights against the power and impunity of transnational corporations, and for the construction of a more just and sovereign society.