Forum on Food Sovereignty in Korea: “Building and strengthening alliance with Korean organizations for food sovereignty” 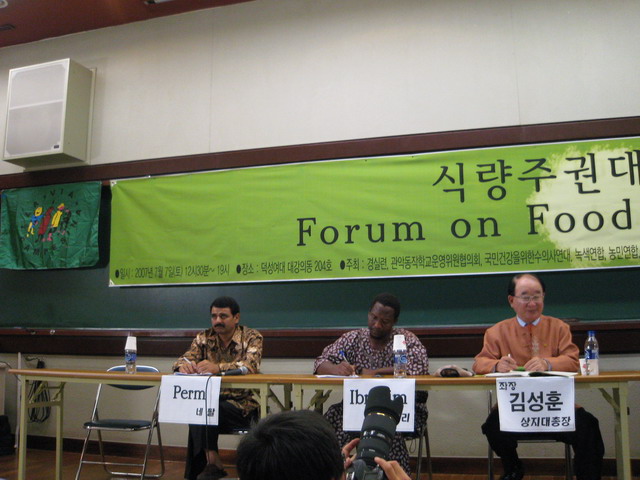 For us in La Via Campesina, our Korean members are a great source of inspiration when we look at their struggle for Food Sovereignty, Korean Reunification, against FTA US-Korea, and the hard struggle against WTO in Cancun and  Hong Kong 2005.

The forum was organized at Duksung Women’s University, in Seoul. There are 6 universities in Korea only for women and Duksung is the oldest one. The forum was attended by 1000 peoples from various organizations in Korea: students, farmers, women, consumers, workers, school lunch organizations, academician, NGO, congress representatives, artist and some foreign delegates invited as speakers. The forum started with a message of Hugo Chaves for the Nyeleni Forum in Mali. This time the video message was already subtitled in Korean.

LVC delegation had preparation meeting with KPL and KWPA before the forum started introducing our delegation as well as the agenda for us during our stay in Korea. LVC also participated in short discussion meetings with the Korean Democratic Labor Party (DLP) on their struggle to fight for farmer at the state level.

LVC delegation was invited by Korea Solidarity for Progress (KSP), an alliance of fifty sect orals and regional representative and twenty five organizations and three regions committed to participate in the organizing committee. This KSP was inaugurated in January 9, 2007 with the participation of 1000 representatives and issued a declaration of inauguration: “New Era of People’s victory through the alliance of progressive movements” 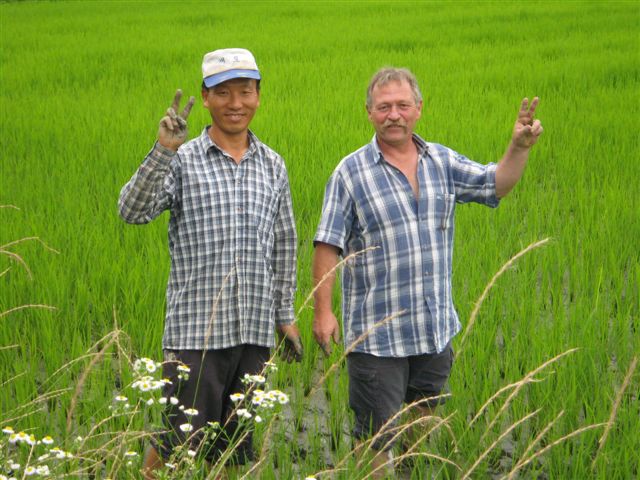 The first session was addressed by José Bové from France, Prem Dangal from Nepal, Ibrahim Coulibaly from Mali, Yoshitaka Mashima from Japan and Brulio Alvares from Venezuela. The speaker talked about the struggle for food sovereignty in their respective countries as well as the progress we are engaged to at international level, in the UN as well as the Nyeleni forum in Mali on February 2007. The forum was chaired by the former minister of agriculture of Korea, Kim Seon Hoon, who is now practicing organic farming in Korea.

In his presentation Prem Danggal of Nepal said the issue of Food Sovereignty has been incorporated in the interim constitution of Nepal. As far as the constitutionalization of this issue is concerned; Nepal is perhaps the first country to go so far. As it is stated in the constitution, people’s food sovereignty is ensured in accordance with some laws to be enacted. The people who are advocating of food sovereignty as an alternative to neo-liberal market driven economy, especially the peasant communities at national level and international civil society organizations have become very happy with this important achievement.

La Via Campesina has been promoting food sovereignty since the World Food Summit in 1996 in Rome. Over the years, our movement has addressed the issue through discussions, seminars, and international forums organized all over the world as well as through lobby work with some UN institutions, especially the FAO and the Human Rights Council. The achievements at international level should now be followed by concrete results at regional and national as well.

The second session was conducted by the Korean organizations on the implementation of food sovereignty in Korea and the building up of the national alliance. The participants strongly committed themselves to implement food sovereignty in the country, a more detailed action plan will be discussed in a few months time. 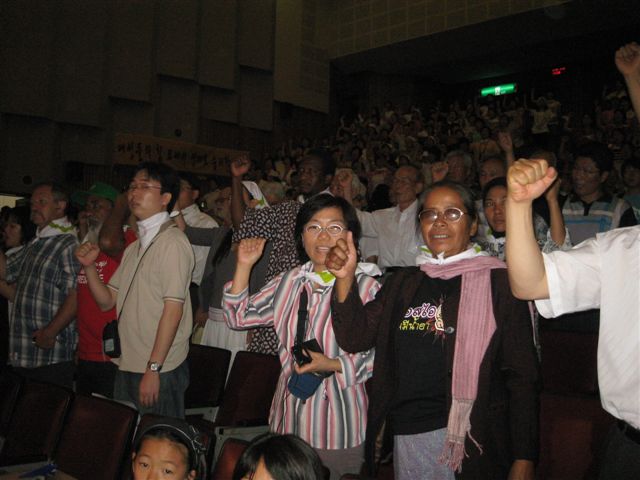 Beside the Food Sovereignty forum, there was also an important forum organized on Free Trade Agreements (FTAs). Korea signed an FTA with Chile inn 2003, and the Korea US FTA was signed last month. According to the Korean farmers, FTAs are destroying their livelihood and therefore need to be rejected.

The US delegation who talked about the NAFTA (North American Free Trade Agreement) experience in US said that many US farmers became poor because subsidies do not reach poor farmers. Subsidies go to the rich farmers with huge land as well as transnational companies.

Jose Bove said that the fight against EPA (Economic Partnership Agreements) is more difficult than the one against WTO because this is only involves a few countries. Therefore, we need to strengthen and consolidate the work. In some countries such as Korea, Philippines and Thailand, it becomes clear that EPA are worst than the WTO.  In Indonesia too, the EPA with Japan is about to start. The draft agreement mentions that some Indonesian agriculture products will be traded for goods such as electricity, mining and telecommunications. While EPA between Philippine and Japan will trade the farming land for landfill waste with Philippine nurses who will get a job in Japanese hospitals.

KWPA, the woman peasant organization, has played an important role in creating a woman alliance in Korea. The 28 woman organizations in Korea agreed to build an alliance. One of their priorities is to raise awareness among woman and promoting food sovereignty. During the inauguration theatre play pictured the difficult situation of being a farmer in Korea. Korean women do not want to marry Korean man farmer because they work hard and they are poor. Men villagers with the help of an agency look wives from other countries in South East Asia. When they get married the foreign wives have difficulty to adjust to Korean culture and sometimes face domestic violence. The children from mixed married also get marginalized because of they have parents from different origins. There is worry in Korea now that farmers are slowly disappearing as they are no longer able to survive from the land. You people prefer to look for badly paid jobs in the cities.

This meeting was a very good opportunity for the foreign delegation to visit a farmer family in Korea. The Family of Lee Hyun Bu has 6 ha of land and grows organic fruits and organic rice. 3 people work in the farm: the husband, the wife and the mother in law. The family inherited the land from their parents. In Yeo Chan province where they live only 5% of the farmers do organic farming and only two families are implementing real organic agriculture by using fermented fertilizers and growing local fruits varieties. According Mr Lee Hyun Bu, organic rice is sold at an expensive price and is bought only by the people who understand the importance of healthy food. His family advertises its production through their website.

Korea is located on the Korean Peninsula in North-East Asia. To the northwest, the Amrok River separates Korea from China and to the northeast the Duman River separates Korea from China and Russia. The total area of the peninsula, including its islands, is 222, 154 square kilometers of which about 45 percent, excluding the area of the demilitarized zone, constitutes the territory of South Korea. The population of South Korea is about 50 million (North Korea has 25 million). At the end of the World War II (1948), Korea was divided into South Korea and North Korea.  In 1953 at the end of the Korean War, a new border was fixed at the demilitarized zone, a kilometer-wide strip of land that runs along the line of ceasefire from the east to the west coast for distance of about 241 kilometer. Seoul, the capital of South Korea, is the largest urban center, having 10 million residents. Busan is the second largest city, with a population over four million.