Home » Final declaration of the 6th Congress of CLOC Via Campesina 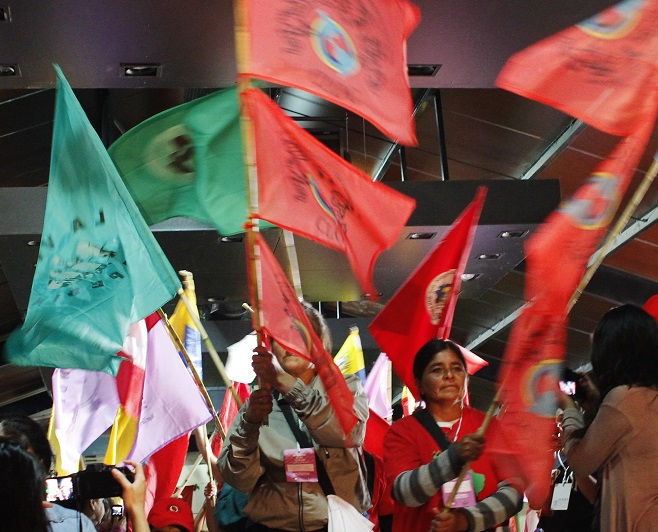 On the International Day of Peasant Struggles and after a march through Buenos Aires streets from the US Embassy, an imperialistic symbol, to the Argentinean Rural Association, a symbol of agribusiness in the country, the organizers shared the final statement of the 6th Congress of the Latin American Coordination of Countryside Organizations (CLOC-Via Campesina) which you can read below. The document is a result of eight days of debates and was read by representatives of the Youth Assembly of CLOC.

“Each person shines with his or her own light. No two flames are alike. There are big flames and little flames, flames of every color. Some peopleâs flames are so still they donât even flicker in the wind, while others have wild flames that fill the air with sparks. Some foolish flames neither burn nor shed light, but others blaze with life so fiercely that you canât look at them without blinking, and if you approach you shine in the fire”.

We are the CLOC-VC, an organized expression of peasant men and women, native peoples, afro-descendants and rural workers.

CLOC is the flame, the light and the actions of Via Campesina in Latin America. We emerged from the heart itself of the 500-year process of indigenous, peasant, black and popular resistance, which gathered the historical peasant movement and the new movements emerging as a response to the dismantling processes imposed by neoliberal policies.

We gather strength, experience and struggles and we build proposals according to the new political moments, highlighting that the agrarian issues are relevant for the society as a whole, and as such, we need to face it with an alternative and popular power strategy.

Our Congress has taken place in a time where contradictions and the class struggle are reflected in the attacks of capital that promotes new wars, oppression and conspiracy against the peoples, for instance the direct attack against Venezuela by declaring it a risk for US security, but also with the different destabilizing coup strategies implemented by an alliance of large communication, business and financial groups that aim to undermine the sovereignty of our peoples and prevent progressive governments of the region from taking action.

Recognizing the advance of regional and continental processes of integration such as UNASUR, ALBA, MERCOSUR and CELAC, the 6th Congress welcomes the solidarity and unity of Latin American and Caribbean countries and organizations that supported CubaÂ´s position and denunciation of the US blockade and the campaigns against their people, an attitude that encourages us to continue building the Motherland of Bolivar, San Martin, MartÃ­, Sandino and Chavez.

We reject patriarchy, racism, sexism and homophobia. We struggle for democratic and participatory societies, free from exploitation, discrimination, oppression, and exclusion of women and young people. We condemn all forms of domestic, social, work and institutional violence towards women.

We raise the flags of our women colleagues: peasant and popular feminism is part of our strategic horizon for a socialist transformation.
The work to strengthen our organizations, especially at grassroots level, will continue being at the center of our priorities. We are committed to strengthen the participation and integration of young people in all organizational processes.

We reclaim Integral and Popular Agrarian Reform, peasant and indigenous agroecological farming as essential elements of our path towards food sovereignty and cooling down the planet, ensuring access to land and water for women, young people, landless workers and ensuring the recovery of territories by native and afrodescendant peoples. We also struggle for the recognition of the social function of land and water, and the prohibition of all forms of speculation and land grabbing affecting them.

We are committed to continue defending and keeping alive our peasant and indigenous seeds, to recover them in the hands of communities so as to reproduce and multiply them based on our peasant systems. We will not hesitate in the struggle against all forms of privatization and appropriation of seeds and life forms.

We need to defeat the agricultural model imposed by agribusiness corporations that is supported by international financial capitals and is based on GM monocultures, the massive use of agrotoxics and the displacement of peasants from the countryside. In addition, this model is responsible for the food, climate, energy and urbanization crises.

We call people to continue struggling for a world free from GMOs and agrotoxics that pollute, make ill and kill our peoples and Mother Earth. We will resist together with the people and communities against extractivism, megamining and all megaprojects threatening our territories.

We celebrate la Via CampesinaÂ´s achievement of putting the Declaration on the Rights of Peasants in the agenda of the United Nations Human Rights Council and demand governments to ratify our positions. We call our organizations to turn the declaration into an instrument for the struggle of rural peoples and the society as a whole.

The future becomes a fertile place when hundreds of children gathered at the 1st Childrenâs Congress delivered their message in favor of peace and protection of our Mother Earth.

Our children are the future, and the present shines with the strength of young people. Our main tools are capacity building, education, communication and mass mobilization, unity and alliances among peasants, native peoples, afrodescendants, rural and urban workers, students and popular sectors organized to conform a force that is capable of achieving the changes we are fighting for. We are living in unprecedented and complex times, determined by a new correlation of forces among capital, the government and popular forces. The imperialistic capital is now under financial and transnational control, so we need to identify ourselves with SOCIALISM as the only system capable of reaching the sovereignty or our countries, highlighting the values of solidarity, internationalism and cooperation among our peoples.

Against capitalism and in favor of the sovereignty of our peoples: the Americas united continue struggling!