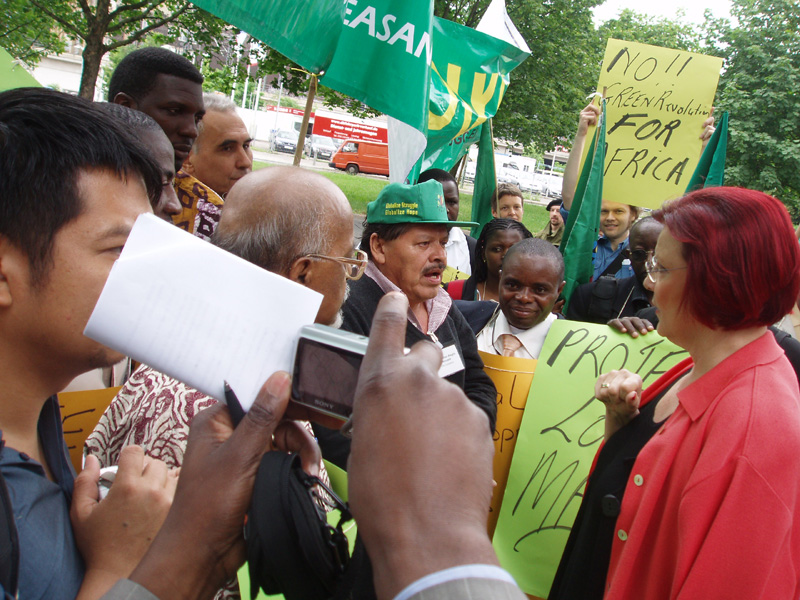 Rural communities are facing a dramatic crisis. All over the world, in poor countries as well as in so-called developped countries, small-scale family farmers are forced to leave the countryside because they can’t access land, seeds, water or credit and because they can’t sell their products on the local markets at fair prices. As a result, out of the 854 millions hungry people in the world, the two third are rural workers, small-scale family farmers and indigenous people.

Free-trade and privatization policies implemented for more than twenty years under the name of rural development have a huge responsability in this current crisis. Transforming agrarian resources into commodities is not in the interest of the poor. It only benefits the well-offs and the transnational companies which, with the help of the World Bank, the International Monetary Fund and the World Trade Organization, have taken over our land, our water, our seeds and now our knowledge.

We do not believe that technology itself can be the solution. So-called Green revolution and GMOs will only increase the concentration of resources in the hands of a few corporations. These „solutions” are promoted by those who do not want to see any real change in the current unfair sharing of resources.

Food sovereignty is the people’s, countries or union of states RIGHT to define their agricultural and food policy, without any dumping vis-à-vis third country. It includes the right for all countries, in the North as well as in the South, to protect their market (through tariff or non-tariff barriers), as well as the prioritization of local agricultural production over export-oriented agriculture. For this, WTO and all other bilateral and bi-regional free-trade agreements must get out of agriculture. EPAs must be stopped. 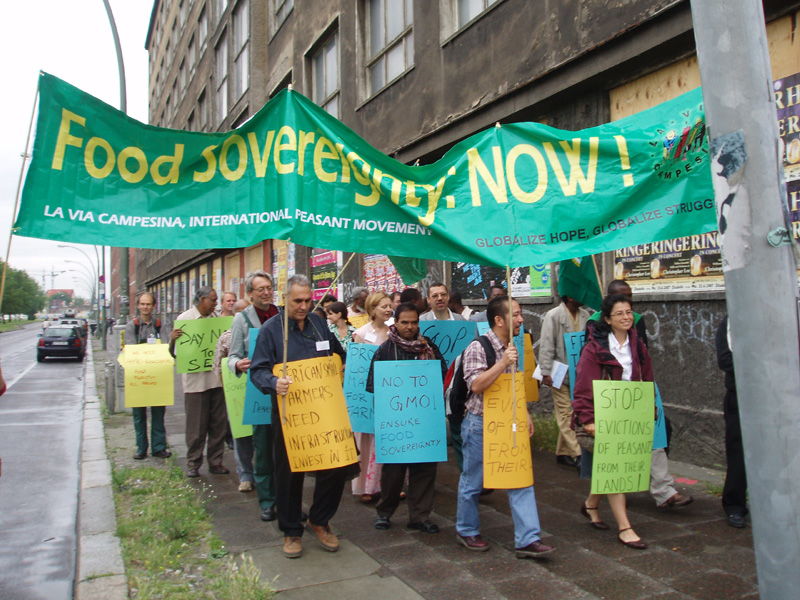 Food sovereignty can not be separated from a genuine agrarian reform which must garantee family farmers, indigenous people, pastoralists, landless people and rural workers, the effective access and control over natural and productive resources that we need to truly realize our human rights. We are against the privatization of land, water, seeds and knowledges and defend the social use of these resources.

Women and men must have equal right to access productive resources. The role of women in rural development has to be fully recognized. It is also particularly important for the future of sustainable family farming to develop mechanisms that ensure access to land and other agrarian resources for young people.

The International Conference on Agrarian Reform and Rural Development (ICARRD) that was held in March 2006 in Porto Alegre, Brazil, made a substantial contribution to the current debate on agrarian reform and rural development. The final declaration recognize key elements such as the need to support traditional and family farming, the need to redistribute land and other agrarian resources in a context of high concentration, the importance of local and national markets, the need to strenghten the role of the State to develop and implement fairer and people-centred agricultural policies and the role of peasants’ organizations in defining agricultural policies.

We thus demand that from now rural development policies and programs be based on ICARRD final declaration and on the principles of international cooperation respectful of peoples and nations sovereignty.

Finally, we call for the strenghtening of strategic alliances between peasants’ organizations and the other sectors of the society in order to achieve sustainable and fair rural development. Food sovereignty is a right for all the people, it is also our common responsability!

No to all free trade agreements!
It’s time for food sovereignty!