Home » Farmers at the Committee on World Food Security: Small scale farmers can feed the world 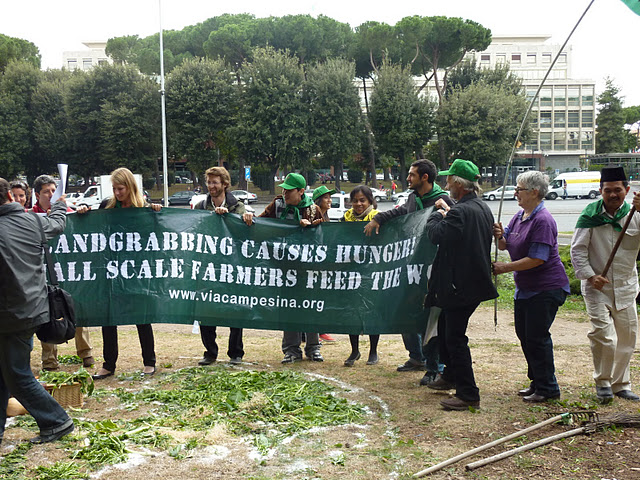 (Rome 19 October) A delegation of farmers of La Via Campesina attending  the 37th session of the Committee on World Food Security (CFS) organised a press conference today to present the proposals developed by small scale farmers. The delegation welcomes the structural participation of civil society organisations to the discussions. This is a positive step towards more democracy and the inclusion of the groups primarily affected by the failures of the dominant food system.

However, government declarations are not yet leading to any concrete policy decisions. Governments seem to be ready to annalyse the damages created by the neo-liberal policies but there is a lack of political will to tackle the root-causes of the current crisis and to propose real solutions.

“On the voluntary guidelines of tenure of land, fisheries and forests, we welcome the progress made in the negotiations, but the adoption of the guidelines should happen as soon as possible. Farmers are being expelled from their lands at this very moment. The states need to recognise the urgency and take measures to stop this right now. On the other side, initiatives to legitimize massive take-over of land such as the principles on responsible agricultural investment (RAI) promoted by the World Bank should be side-lined for once and for all. It should be clear that large-scale land acquisitions are not an investments in agriculture. This is corporate greed at the expense of the most vulnerable”, recalls Ibrahim Coulibaly, a farmer from Mali.

”It is clear that price volatility is a symptom of the dominant agricultural and financial system. In order to tackle it, public market and production regulation mechanisms should be put in place at all levels as well as an interdiction to speculate with food” said Javier Sanchez, a Spanish farmer at the Via Campesina press conference.

On the other hand, it is important that the analysis and positions adopted at the CFS are coherent with regional and national policies. “Agricultural policies need to guarantee regulation of markets and production as well as remunerative prices for producers. The current proposed Common Agricultural Policy in Europe and the US Farm Bill are highly export-oriented and therefore sustain an industrial model of production. The negative externalizations of this industrial model are high and affect all people. Xavier Delwarte, a Belgian farmer representative.

“Peasants, fisher folk and other small scale food producers hold the solutions to feed the world. Public policies based on food sovereignty are the only way out of the systemic crises. Neo-liberal policies support transnational corporations, while it is time to support food producers and consumers” reminds Henry Saragih, the general coordinator of La Via Campesina