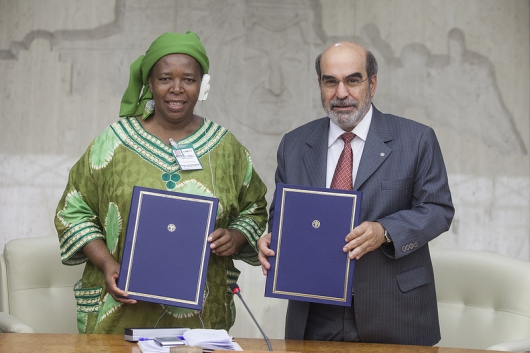 (Rome, 4 October 2013) Today, during a meeting between La Via Campesina and FAO’s Director general Jose Graziano da Silva an agreement of cooperation was formalized which acknowledged the essential role played by small holder food producers. Their role was recognised as most important in the eradication of world hunger. The cooperation will focus on various key areas: strengthening peasant based agro-ecological food production, protecting small holders rights to access land and water, as well as improving farmers rights over seeds in accordance with international and national seed laws. This cooperation’s framework will lay special emphasis on the key role played by youth and women in food production as well as the need to improve their access to land and other productive resources.

According to Elizabeth Mpofu from the General Coordination of La Via Campesina,“this is an important step forward in our efforts to address UN institutions and governments to have a policy shift towards food sovereignty. We expect that this cooperation will give further support to our peasants and small farmers who work on their fields to produce food for the majority of the world population“

During the meeting, La Via Campesina expressed its concerns regarding the promotion of Genetically Modified Crops and the growing trend of massive land grabs which have been driving farmers off their lands.

According to Rodolfo Greco, a farmer leader from Argentina “young farmers are the first victims of land grabbing and the market oriented production model imposed by transnational corporations. We have to keep youth on the land as there is no dignified future for them in the mega cities that are arising“.

Chukki Najundaswamy, a woman farmer leader from India said „seeds should remain in the hands of the farming communities, we cannot afford to loose control to transnational corporations who will exploit this peoples heritage for profit rather than care about feeding people, we have to continue our struggle to achieve food sovereignty“.