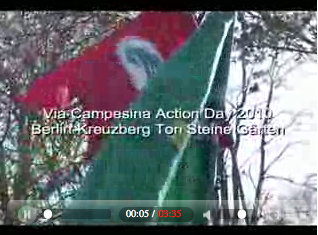 This is a video about the 17th of April 2010 – celebrated as Via Campesina Action Day in rememberance of the massacre committed on Via Campesina activist farmers in Amazonia. In this year the activists in Berlin organized a number of discussions and film viewings and finally this meeting in a formerly squatted vegetable garden in the center of Berlin. “Another world is plantable” is written on the wall in this garden and the garden collective “Ton Steine Gärten” is planting food here since a year now. Also there is a small interview with an activist from “Reclaim the fields” a group which was formed in the last ESF in Sweden and is now squatting fields and planting food in various places in Europe. But see for yourself!