UAWC’s statement on the occasion of international Peasant Day 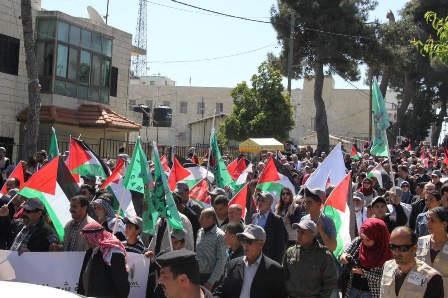 The largest peasant movement in the world, La Via Campesina, commemorated on the 17th April, the international Peasant Day, that commemorates the massacre of 19 landless farmers demanding access to land and justice in 1996. This day is also the Palestinian prisoners’ day, a day of commemoration in honor of our detainees. Also, it came few days after the Palestinian Land Day, a day when all the Palestinian people have revolutionized to defend the Palestinian land from the settlers’ confiscation.

On this day, all the peasants of the world stand to confirm their constant defense of their rights to food sovereignty and social justice. In essence, the small-scale farmers are exposed to several types of injustice and tyranny practiced by their oppressive governments that were and still consider them as a commodity traded when necessary.

Today, after the eighty-two years of the anniversary of the displacement of the indigenous people (Palestinian people) and turning them into refugees distributed in various countries, land owners are still continuing to struggle to gain their rights of return to their lands.

Since the Palestinian community is a farming community, the Palestinian farmers constituted the largest number of the Palestinian community. Their lands are stolen on daily basis, and they are considered as some of the biggest victims of the Israeli occupation, in absolute violation of international law. The Palestinian farmer is not allowed to use his own land, his own water resources, or even his own agricultural roads to be able to access his land. Therefore, the Union of Agricultural Work Committees (UAWC) was established to defend Palestinian farmers’ rights and raise their voices among the international community. Thus, during the 6th conference of La Via Campesina and their commemoration of the 20th establishment anniversary in 2013, with the presence of 500 members represented 88 countries, it was announced in the Indonesian capital, Jakarta, the acceptance of Palestine as a full member of the movement that includes 200 million farmers from the world.

The membership of UAWC in the movement, and its commemoration of the international Peasant Day came from its deep belief in the importance to support the right of small-scale farmers to gain their right of food and resources sovereignty, and from its belief in the importance to contribute to the protection and preservation of the hereditary seeds, and resist the giant companies and globalization policies, in order to accomplish food sovereignty for the Palestinian farmers and the farmers around the world.

Finally, the UAWC emphasize that it will remain faithful to its mission (protecting our land and standing in solidarity with our farmers). Also, it confirms that the Palestinian land and its protection will remain its main working focus, and it will always make every effort to support the Palestinian farmer in the face of the Israeli occupation, . Today, the UAWC raises its voices with the whole Liberal peasants in the Middle East and North Africa and the world who are struggling for their rights for a real social justice.

Greetings to farmers and disadvantaged producers