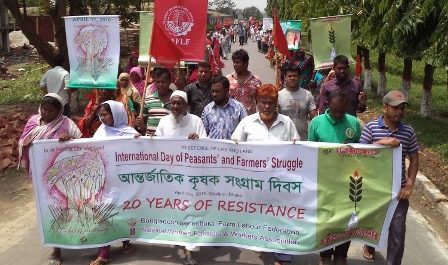 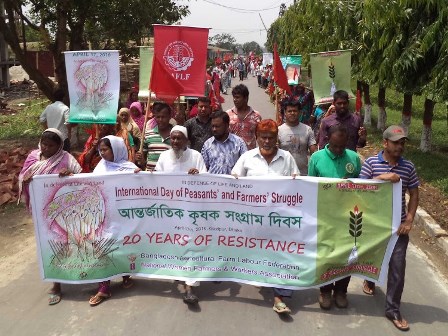 (Dhaka, April, 2016) Bangladesh Agricultural Farm Labour Federation (BAFLF) and National Women Farmers & Workers Association (NWFA) have observed the International Day of Peasants Struggle to commemorate the massacre of landless farmers in Brazil as well as the recent killing of farmers and landless defenders for struggling their land, food and livelihood throughout the world including Bangladesh, Honduras, Columbia, Philippines and Brazil. To mark the Day, BAFLF and NWFA organized a rally in Gazipur, Dhaka. Farmers, women peasant and agricultural workers took part at that gathering to raise their demands for comprehensive and actual Agrarian Reform to ensure peoples’ food sovereignty.

Subsequent to the rally, a meeting was held. Md. Mamun of BAFLF conducted the session. Among others who spoke at the occasion were Ruhul Amin, Abdul Rahim, Ashish Rojario of BAFLF and Rima Akter, Farjana Begum, Nurjahan Begum of NWFA and several other farmers’ leaders.

The speakers at the meeting said that in 1980’s agriculture contributed 33.07% of GDP in Bangladesh but now this rate is decreasing. Farmers, during those days, controlled agriculture and had control over land, seed and water. Various government policies in the years that followed, took this control away from farmers. At this point, trans-national corporations and local private firms are dominating agriculture and they have also captured the agricultural market. Under the influence of powerful lobbies, government is pushing forth privatisation and commercialisation of agriculture and natural resources, resulting in farmers turning landless and poorer. The speakers also insisted that only a genuine agrarian reform can save farmers and small scale peasants. On behalf of BAFLF and NWFA, Golam Sorowor places 15 points specific recommendations for Comprehensive Agrarian Reforms.

These are as follows: