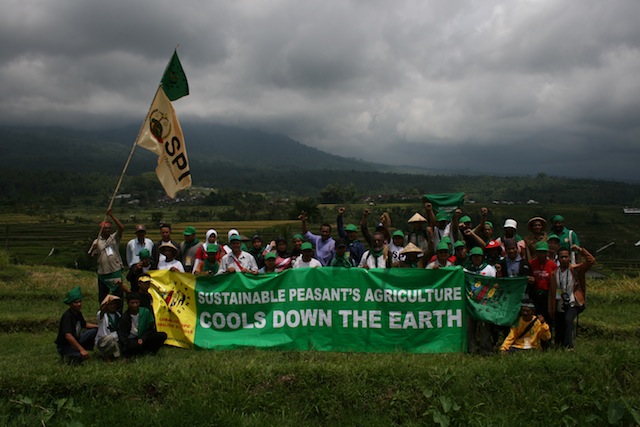 CLIMATE SPACE : RETHINKING STRATEGIES TO FIGHT FOR OUR FUTURE

The 2013 World Social Forum will be held this March 26-30 in Tunisia, where only two years ago, a revolution began and resulted into a historic change that created a ripple effect on the region. Now, Tunisia is an inspiration to movements both old and new, across the globe.

It is with this inspiration, from the wave of changes and the rise of new movements with exciting new strategies and tactics that the idea of the Climate Space was born. The Climate Space will be a fixed space inside the World Social Forum 2013 in Tunisia to discuss the causes, impacts, struggles, alternatives and strategies to address climate change. It will be a venue with various workshops, debates and strategy sessions.

We have lost too many important battles in the fight for climate justice that there is little time left for us to stop Mother Earth and humanity from falling off the precipice and into a future too dire to imagine. Climate change is already contributing to 400,000 deaths a year. Just these past few months we witnessed the devastation of the Southern Philippines with a typhoon so destructive that it killed more than 1,000 people and left thousands without homes or livelihoods, the extreme heat in Australia that gasoline would evaporate, and, the ruin that Hurricane Sandy wrought on Haiti, parts of Canada and the United States. The United Nations Framework Convention on Climate Change (UNFCCC), the body tasked with agreeing on a global deal that would halt our march into climate chaos, has, instead, protected business as usual and agreed on a deal that would burn the planet.

The scientific evidence is overwhelming. The impacts are felt and seen firsthand the world over. Studies have shown that if we are to have any chance at reversing our march into climate chaos, that we need to leave the remaining fossil fuels in the ground and yet, governments continue to dig deeper into oil pits and tar sands. Action is what is needed if we are to change our future.

The Climate Space aims to bring together environmental activists and social activists in order to discuss: What went wrong from Bali to Doha? How can we achieve the target to leave more than 2/3 of the fossil fuels under the ground? What are our decentralized energy alternatives? How do we tackle the food crisis that is aggravated by the climate and financial crises? How do we stop the disruptions of the vital cycles of water? How do we respond to the need of employment and stop this suicidal path of endless growth? How do we strengthen the fight against false solutions like GMOs, Synthetic Biology, Agrofuels, and Geoengineering?  What are the implications of the financialization of nature through green economy, carbon markets and REDD? What are the threats of climate security for peace, democracy and migrants? How do we build alternatives to capitalism from experiences like “Vivir Bien”, the defense of the commons, the happiness index, food sovereignty and other examples that have already been developed from the grassroots?

Because it is true that for many, many years, indigenous peoples, small farmers, local communities, have been practicing and developing ways of living and co-existing with nature. Agroecology, a system of farming that peasants and small farmers has been using and developing, has even been proven by scientists to not only feed people better, healthier food but it also has the ability to cool down the planet. But how do we bring these solutions to the forefront and put a stop to the harmful false solutions?

In other words, how do we go beyond our usual strategies and see how we can win concrete victories on the ground by working together, across sectors, across movements, old and new, linking social struggles with environmental struggles bringing together trade unions, peasants, women, indigenous, migrants, faith communities, indignados, occupy movements, Idle No More and other climate & environmental activists.

We invite all of you who are interested in turning the tide to come and join us in the Climate Space at the World Social Forum in Tunisia, March 16-30, 2013.

Access here to practical information on this climate space.

Focus on the Global South