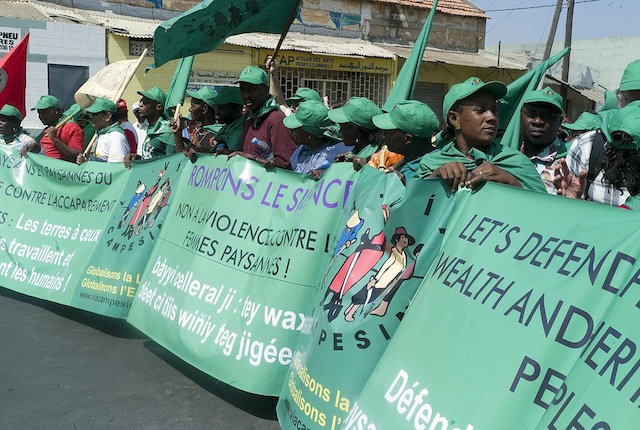 From March 26 to 30, the International peasant´s movement La Via Campesina will be at the World Social Forum, in Tunis – capital city of Tunisia. More than 50 farmers from all continents of the globe will gather in Tunis, joining thousands of other activists from around the world.

This important event is happening in Tunisia, a country that was subjected to an oppressive regime many years, and whose people rose up and demanded democracy, something Tunisian civil society is still struggling to fully achieve. Nor should we forget that the “Arab Spring”, in Tunisia started when a Tunisian street food vendor set himself on fire to protest against the confiscation of his produce and the humiliation he suffered in the hands of Tunisian municipal authorities.

La Via Campesina will defend food sovereignty as the solution to the food, economic and climate crises.

At the World Social Forum, La Via Campesina will be part of the Climate Space and the International Migrations Space and will build solidarity with women from the Magreb-Machreb region and from around the world. The World Social Forum is a place to build alliances and consolidate alternatives to the current social, environmental and economic crises.

With our allies, Via Campesina is organising several conferences and discussions, namely:

La Via Campesina will have a stand at the World Social Forum where documentation will be available. The stand will also be a meeting point for La Via Campesina people and allies.

Appointments with the media in Tunis will be announced soon.