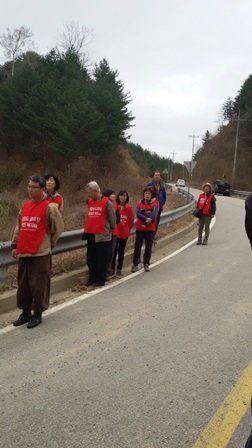 Gangwon Province contains some of the country’s most impressive mountain and national parks, including Sorak-san and Odae-san National Parks. The mountainous terrain also provides excellent slopes for several ski resorts and golf courses.

The construction of golf courses in this province has seized the land of the farmers; they have been fighting for almost 11 years to protect their land from the land grabbing carried out by Transnational Corporation. On august 29, 2014, sixteen people were expulsed from their farming land. People protested the construction of the golf courses by camping in front of the government office for 590 days and filed law suits but most of the struggles were not victorious.

The construction of the golf courses can contaminate people drinking water from the reservoir and can cause water crisis for farming in Wonju. Not only water – it will destroy the environment in general, people’s properties, ancestor’s graves, native seeds, and the loss of the people’s food sovereignty.

The rejection of the golf course construction has criminalized 27 residents; they have to pay a fine of USD 100.000 as compensation. To pay for the compensation, farmers collectively grow beans. The struggles will continue until we achieve victory and get back our land for farming.

La Via Campesina, on April 17th, on the occasion of the International Day of Peasant struggle against Transnational Companies and Free Trade Agreements,  demand the Korean government to stop the construction of the golf courses and to protect the people’s food sovereignty. La Via Campesina with Korean farmers and various civil society organizations will continuously protest the Free Trade Agreements and Trans Pacific Partnership Agreement that will kill our peasants and our agriculture.