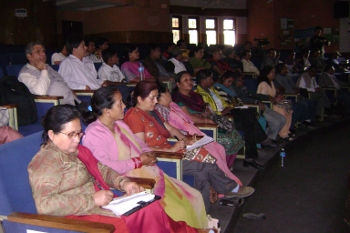 ‘Unless and until peasants’ fight for the food sovereignty and revolutionary land reform, Peasants’ right can’t be ensured’

In that programme Chair person of the All Nepal Peasants’ Federation, Mr. Bam Dev Gautam urged the need of land reform and the importance of the peasants’ in such developing country Nepal where 67% of the population relies in Agriculture. ‘Unless and until peasants’ fight for the food sovereignty and revolutionary land reform, Peasants’ right can’t be ensured’.

Similarly, Agricultural expert, Dr. Kailas Pyakurel focused the role of peasants’ organization in mainstreaming the agriculture and peasantry. In this program conducted by Sarada Parasad Subedi, Treasurer ANPFa; where as Hari Parajuli, Secretary, ANPFa highlighted on the issues of genetic engineering and the new bill presented at parliament. ‘GMO destroy our health, culture and bio-diversity’.

Prem Dangal, Secretary General presented overview the 60 year long peasants struggle of Nepal and urged the need of comprehensive peasants movement for the peasants’ right. We are not going to have our right easily as MNCs, Neo-liberalism, WTO and even our governments, all are taking advantage of peasantry and agriculture. So Lets join our hand in hand to fight collectively for the revolutionary change’ he chanted. The program was focused on agrarian issues and the peasants’ right.

More than 60 representatives were participating the program including different media. Peasants’ activist, academician, experts and CSO leaders along with peasant from different region of Nepal actively shared their ideas on how can we make the peasants’ movement stronger for the rights of peasants. The day long program was ended up with a short speech from Shanta Manavi highlighted the pathetic situation of women peasants in Nepal.17th April. 2011