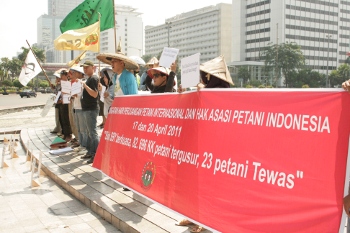 JAKARTA. Serikat Petani Indonesia (SPI) celebrate the International Peasants’ Struggle Day with a simple action in the heart of capital, Jakarta. Peasants gather in order to remind the government and the people that there have been increasing violations of the peoples’ rights, especially the rights of land.

“In the name of capital, hundreds of thousands hectares are converted to plantation and food estate,” says Achmad Ya’kub. Therefore in Indonesia, there are these increasing cases of agrarian conflicts between peasants and indigenous people versus companies and the government. The phenomenon is now trending like the land grabbing scheme all over the world.

SPI recorded in 2010 that there are at least 23 people died, and 21,367 other are evicted from their land. Just yesterday, a conflict between the Army and local people in Kebumen, Central Java wounded tens of peasants defending their land.

“We have to end this injustice,” Hesti Ningrum, a member of SPI says. “There has to be priorities for peoples’ rights to land and productive resources—such as water and seeds—a genuine agrarian reform,” she continues.

SPI and its allies are now in process of proposing a law on protection of the rights of peasants. “Beside our daily struggle defending our land and producing food, a policy change is politically important as well,” Hesti concludes