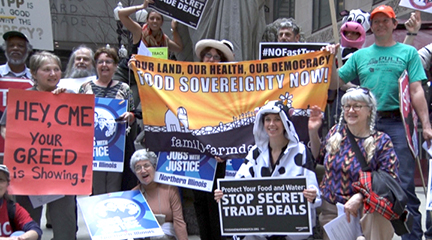 (USA, Chicago, April 17, 2015) On International Day of Peasant Struggle, April 17, 2015, members of Family Farm Defenders and allies gathered to protest Fast Track and the Trans-Pacific Partnership (TPP) in front of the Chicago Mercantile Exchange. They see eliminating the Fast-Track trade authority as the way to stop the U.S. from signing on to the TPP.

John Peck (Executive Director of Family Farm Defenders) summarized what the TPP was: “The Trans-Pacific Partnership is basically like NAFTA for the Pacific…If TPP passes thousands of American dairy farmers will go bankrupt…It will also downgrade a lot of consumer safety standards, [such as] the right to know.” We should also note that the AFL-CIO in discussing the TPP has said that “what is known is cause for great concern.”

The TPP may get pushed through using the “Fast-Track” strategy. Wisconsin farmer Joel Greeno (President of Family Farm Defenders) explained that “in order to expedite that process Fast Track will grant the President full trade authority to present the trade bill and Congress… all they can do is vote yes or no on the bill, they cannot review the bill, they cannot change the bill…We feel that if Congress is given the opportunity to vote on the bill on its own the debate will shred it because there are so many things hidden it it…The key to stopping it is stopping the Fast-Track trade authority.”

The C.M.E. was selected as the venue of the protest because it is the world’s largest private trading clearinghouse. Speculators have only financial interest in the commodities they trade, rather than the effects these trades will have on the majority of the population. This has led to shady deals, and policies that negatively impact the public, including farmers and workers.

Reminding us of the steady diminution of family farms over the decades, Greeno explained various ways that this has affected industrial workers: “When John Deere is laying off thousands of workers right now across the nation because they know that they are not going to be able to sell John Deere farm equipment ’cause there’s nobody left to buy it, and it’s too expensive to buy, and there’s not enough corporations left to buy enough to keep John Deere afloat…what does that tell us?”

Chicago Teachers Union activists have been pointing out that more funds could be raised for public education if there were a transaction tax at the C.M.E. John Peck pointed out that the C.M.E. traders are getting a big fat free ride at taxpayers’ expense: “They get hundreds of millions of dollars in tax payer subsidies to run this outfit here. And they’ve threatened to move to Indiana if they don’t get that from the City of Chicago. They’re the largest, most profitable corporation in Chicago, so they should be paying their taxes…Why does the C.M.E. get tax breaks?”