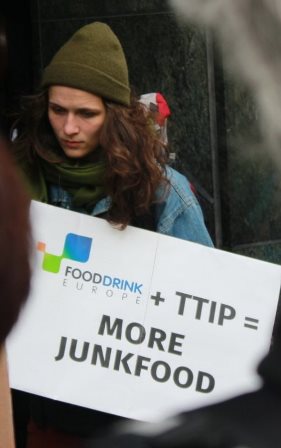 (Belgium, Brussels, April 17, 2015) On 17 April, Via Campesina, the D190-20 Alliance and Corporate Europe Observatory held a lobby tour around the Brussels European quarter, highlighting the corporate lobbies who are pushing an aggressive agenda around TTIP (the EU-US trade deal currently being negotiated). There was a particular emphasis on the impacts TTIP will have, if passed, for farmers’ livelihoods, food standards, and for the way food is produced in the EU. The next negotiation round will take place on 20 April, this time in New York.

Around 70 people joined the tour, including a Europe-wide delegation of members of Via Campesina and many journalists. The 17 April is Via Campesina’s International Day (link is external) of Farmers’ Struggle, this year focussing on the impacts of free trade agreements on farmers’ livelihoods. The following day, 18 April, is the Global Day of Action (link is external) against free trade agreements, notably TTIP. In Belgium, a big demonstration is organised for Brussels.

Starting at the offices of FoodDrinkEurope, it was explained how corporate lobbies on both side of the Atlantic are comprised of the same few multinationals; in this case Nestle, Unilever, Mondelez and the like. They are pushing for so-called ’regulatory cooperation’, which they hope will put up a major new barrier to any progressive rules on public health or environmental protection. They have joined forces with COPA-COGECA, the federation of the biggest industrial farmers in Europe. There’s a big question over whose interests COPA-COGECA is actually representing: only “the 1%” of European farmers who’ve got access to most capital?

On to BASF. The biggest chemical corporation in the world, BASF is working through lobby federations such as CEFIC (chemical industry) and ECPA (pesticide sector) to kill off initiatives that would protect us from chemicals that can interfere with the (human) hormonal system, or that aim to ban pesticides that are very toxic to bees. They coordinate their lobby efforts with their American counterpart CropLife US, again representing the same companies.

Next was FEFAC, the federation of animal feed producers and traders including corporations like Cargill and Bunge, who are pushing via TTIP their agenda to abandon the EU zero-tolerance policy towards unauthorised (read: illegal) GMOs contaminating food and seeds that are shipped to the EU. For animal feed, they have already obtained a threshold for ’acceptable’ contamination, after years of battling.

Passing US Chamber of Commerce, which represents “US business interests in the EU”, and coordinates their effots on TTIP with Brussels business lobby, BusinessEurope – indeed, the same companies are on both sides of the Atlantic..

Jim Goodman, US farmer member of Via Campesina, told those gathered how corporations in the US are lobbying against GM labelling: Peter Chase, before becoming the US Chamber lead lobbyist in Brussels, had a long career in the US government, building up plenty of contacts. This is a perfect example of the ’revolving door’, with people changing from jobs in public office to private companies. For a few years he was even acting as the US special envoy on biotechnology, promoting GM crops in the Global South.

On to DG Trade, the department of the European Commission in charge of negotiating TTIP. On whose behalf do they negotiate, you may ask? The statistics show that it’s not public interest groups, but over 90% corporations that have had direct contact with the Commission in the lead up phase to the TTIP negotiations. Trade commissioner Cecilia Malmström has just made it worse, hiring Jan Eric Frydman as Special Adviser on EU-US Trade Policy, whose ongoing work for Swedish law firm Ekenberg & Andersson creates potential conflicts of interest. He has a strong pro-ISDS background and a tricky revolving door history. He’s part of the problem, not the solution!

The grand finale was at DG Agriculture, just a bit further down the road on Rue de la Loi. Despite the security’s objections, 20 participants of the tour managed to get inside the building’s entrance hall, demanding to speak to John Clarke, head negotiator on agriculture issues. We were told that in the department things were crazy with meetings preparing next weeks negotiation round in New York. Clarke came down nevertheless, where he met farmers’ representatives demanding that TTIP negotiations would be suspended. Mentioned among the expected impacts for farmers were how TTIP will further push industrial farming, support the interests of agribusiness and big landowners, threaten the survival of small family farms – especially meat and dairy farmers – and harm local food initiatives and impede initiatives for green and fair public procurement.

John Clarke accepted the demands, and repeated the Commission’s line that ’food standards will not be lowered in the EU’ and that he did not want to see farmers livelihoods jeopardised.

But DG Trade has clearly said last year that also in agriculture, there will be ’winners and losers’ of any trade deal, and that with Europe having higher labour and energy costs, the agricultural sectors will have to ’adapt’. But DG Agriculture (and the EU at large) will at some point be held responsible for those farmers or regions will have to ’adapt’ or disappear!