Brazil at Brasilia: Camp for Democracy already counts with more than 3.5 thousand people 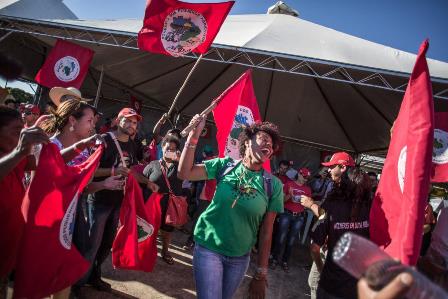 While Friday, April 15th is marked by many street protests all over the country, at Brasilia the mobilization to fight is permanent. Until the afternoon of the 5th day of the occupation at the National Camp for Democracy and against the Coup, more than 3.5 thousand people already shared the daily routine at the Mané Garrincha Stadium surroundings.

“The mobilization is growing constantly. Each time more people arrive and the people all around Brasilia has been very supportive”, explains Rafaela Alves of the Small Farmers Movement (MPA) and and a member of the Camp organization.

For the actions on Sunday, it´s expected more than 200 thousand people for Democracy and against the coup. “The wall raised in front of the Congress represents very well the class struggle, that always existed and now materialize itself”, says Rafaela. She also evaluated positively the peaceful climate at the Camping. “It´s been a beautiful process. The Unity in fight among so many movements is so clear, so mature, that there´s no space for problems. The convictions are bigger”, concludes.

Overall, 67 movements, unions, and parties participate in the occupation and organise together the spaces. Tents that don’t belong to any organized movement also grow in number as the day of the voting of the impeachment approaches, that is Sunday the 17th. Before that, the highlight of the program is the visit of Dilma Rousseff, booked to 10 o´clock this Saturday (16th).

If it depends on the campers, Democracy will endure and it will be plenty. The communion of different movements from the field and the cities stimulates the togetherness and exchange of materials and affection. From the integration at the concerts, cultural events and talking groups, the equality in the relations dictates the relations in the routine of the occupation.

Marco Antonio Baratto, from MST (Farmers Without Land Movement), also in the coordination, salutes the organization. “ we are achieving a good organizational control. The ones who see it from the outside get astonished with the collective construction and the possibility for the dialog. From a political point of view, we are building the spaces with debate processes.