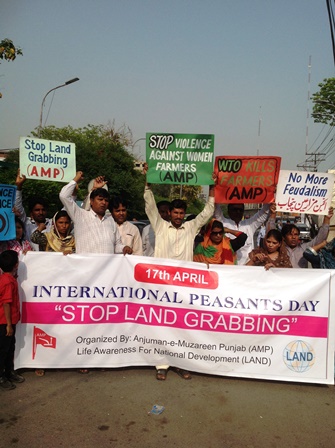 (Pakistan, Lahore, April 17, 2015) Anjuman-e-Muzareen Punjab, Pakistan (AMP) (A Movement of Landless peasants) organized a demonstration on “International Peasants’ Day” on Tuesday, the 17th of April 2015 at 3:30 pm, in front of the Lahore Press Club, Lahore.

Its purpose is to have ownership rights to those who have been tilling almost a century. In this protest, the peasants reminded, the Punjab government who had promised in the high level meeting between leaders of AMP and senior advisers of Chief Minister of Punjab on the day of AMP’s peasants Long March on 9 March 2010 and 2011 to give this land to the tenants. Up till now, still they have not fulfilled their promises. They also demanded to put an end all fake cases against the leaders of AMP. There were hundreds of peasants representatives including women, children, political leaders and social activists participated in this event.