Home » Events » 17th of April : The Netherlands : Solidarity actions: more money for tomato pickers and attention for the negative impacts of GMOs in agriculture

17th of April : The Netherlands : Solidarity actions: more money for tomato pickers and attention for the negative impacts of GMOs in agriculture 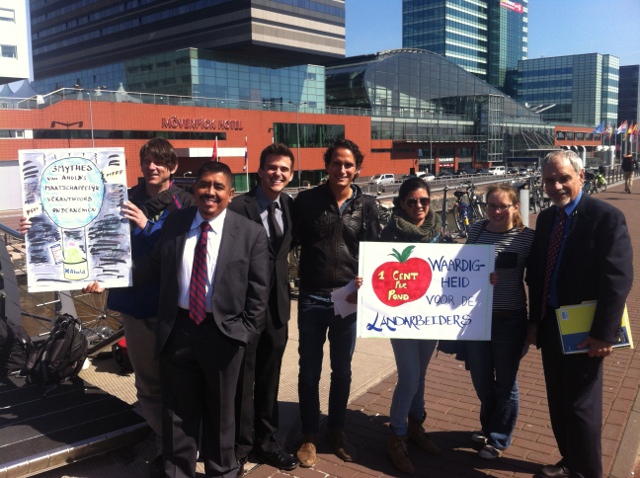 (Amsterdam, April 17, 2014) April 17 is the day for farmers struggles, proclaimed by La Vía Campesina, the international organisation of peasants and small farmers. On this day, in 1996, 19 landless farmers were killed in a protest in Brazil. In solidarity with Vía Campesina and the victims of large agricultural corporations, ASEED was involved in two small action in the days before April 17.

On Tuesday April 15 we have handed out flyers at the symposium “Genetic Modification, Friend or Foe” in Amsterdam. This was organized as the farewell event for the retiring Professor Rudy Rabbinge. But the list of speakers didn’t predict a very unbiased debate. The possible health issues will be discussed, but the negative effects on biodiversity by the increase of monocultures, the growing power of multinational corporations with their patents and other social aspects in the agrarian reality were not in the agenda. But this are the aspects that farmers all over the world have to deal with as soon as GMOs are introduced.

According to ASEED, and many farmers organizations worldwide, it is about time to look at the real problems related to agriculture: hunger and poverty. Those can be solved by a better distribution and the use of agro-ecological principles. In practise the use of GMOs results in a more dominant position for large corporations, a faster degradation the soil and an increasing use of pesticides. And, contrary to what is said by the PR of the GM-lobby, on the longer term the harvest didn’t increase after the introduction of GM-crops.

Wednesday April 16 the Coalition of Immokalee Workers (CIW) held a picket line in front of the building where Ahold held its annual shareholders meeting. Ahold is the Dutch holding owning the supermarket chain Albert Heijn. Also in the US they own some supermarket chains and there they have a conflict with the CIW. CIW is already for more than 20 years campaigning for higher wages and better working conditions for the tomato pickers and fights against sexual abuse and slavery. Companies like Walmart, McDonalds and Burger King, not really known for their social behaviour, gave in and signed a legally binding Fair Food programme. Now it is mainly Ahold who is refusing to participate and take care that the farmworkers are paid somewhat higher wages and accept the other conditions like a thorough monotoring of the work in the fields. For this reason CIW came to the Netherlands to get attention for this issue and the shareholders to do something about this irresponsible behaviour.

ASEED was helping out and in total about 20 people have been standing in front of the entrances and handed out flyers to shareholders and other people passing by. The campaign of the CIW seems to have some success at the moment; in an article in Het Financiele Dagblad (Dutch financial newspaper) on April 16, Ahold seems to be moving. They would consider to sign. Hopefully this action gave them the final push.

The text from the leaflet handed out at the debate “Genetic Modifications, Friend or Foe?”:

We are here together because Professor R. Rabbinge is departing as Chair of the Academy’s Council for Earth and Life Sciences.

For this reason a debate about genetic modification is organised. Although the title of the debate is “Genetic Modification, Friend or Foe”, we do not think that an unbiased group of experts has been invited.

The question should not be if a GMO is friend or foe, but if they are able to solve the hunger issue. Many reports, including some from the UN, are saying that agriculture based on agro-ecological principles will be much better and more efficient for solving the problem of hunger.

At this moment GMOs are not suitable for this kind of agriculture, they are tailor-made for large-scale monoculture, therefore input-rich agriculture which is mostly controlled by large corporations. Monocultures decrease agro-biodiversity which is crucial for a resilient agriculture and erode soils.

On the long term, GMO yields are not higher than other crops.

In addition, GMOs mean that corporations get more control on crops because of the possibility to patent them. Corporate take-over of smaller seed companies has decreased the choice of crops for farmers on the one hand and on the other hand had made the exchange of seeds between farmers harder because of intellectual property rights.

In theory, GMOs might be an interesting subject to learn more about how plants work, they are fit for being used in greenhouses. Their release into the environment should be delayed until real long-term safety tests are conducted.

In theory, new GMOs might be able to withstand dry and salty environments, and can increase yields. This is not what is happening in practice. The crops on the market are mainly herbicide-resistant (glyphosate) or pesticide producing (Bt) with all the problems of resistant weeds, water and soil contamination and pests accompanying it.

So let’s look at real solutions for hunger: better distribution,research into agro-ecology, for healthier people, soils and biodiverse fields.