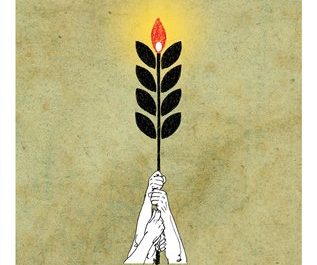 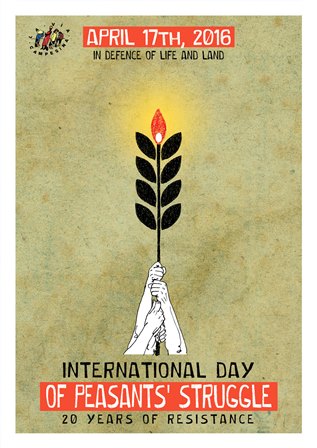 (Harare, 15 April 2016):  On April 17, The International Day of Peasant’s Struggle – millions of peasants and their allies – women and men – around the world are uniting in action to commemorate the massacre of 19 landless farmers in 1996[1]in Brazil and to continue the struggle for land and life. Two decades after that despicable incident took place in Eldorado dos Carajás, peasants and peasant leaders continue to be assaulted and killed for defending their rights. The killing of Honduras activist, Berta Caceres, and other peasants in Columbia, Philippines and Brazil in recent weeks and the criminalization of social protest and many other forms of human rights abuses continue.

La Via Campesina denounces all forms of injustices that affect the peasant way of life, an important heritage of the people at the service of humanity.

Constant attempts are being made to push forth an agro-business model that imposes the practice of monoculture which privatizes land and natural resources in order to increase profit, denying their appropriation by the society for common good. It destroys biodiversity, uses more and more toxic inputs, drives peasants off their land, and forces governments and nation states to bow to its will.

Unlike many governments, which continue to build repressive alliances with big businesses to promote profit maximisation, La Via Campesina believes the time has come to build an economy based on equity that will restore the balance between humanity and nature founded on peoples’ Food Sovereignty principles.

“It’s unacceptable that in 2016 farmers are still being killed for defending the very basis of life: the nature and the right to grow food” said Elizabeth Mpofu, General coordinator of La Via Campesina.

With hundreds of actions taking placed in all continents peasants and their allies are united in solidarity to defend their land and to push back the frontal assault on their fellow people in all parts of the world. The actions, led locally by peasant organisations who are members of La Via Campesina and by many other groups, collectives and organisations, involve reclaiming grabbed lands, demonstrations against agro-business models, food sovereignty fairs, seed exchanges, video screenings, conferences and more.

Register your actions by sending us information about the planned events to our mail: lvcweb@viacampesina.org

Please also send us pictures, videos, posters, flyers etc. We will publish them together with a map of all actions on www.viacampesina.org

[1]On April 17th 1996, in the Amazonian state of Pará, at Eldorado dos Carajás, the state military police massacred peasants organized in the Movement of Landless Rural Workers (MST), killing 19 individuals and injuring 69. That day, 1500 women and men organized in the MST occupied and blocked the BR-150 highway in Eldorado dos Carajás, with the aim of bringing pressure to bear on the State and Federal governments to implement agrarian reform. State authorities, the police, the army and powerful local landowners were involved in the planning and executing of the massacre.