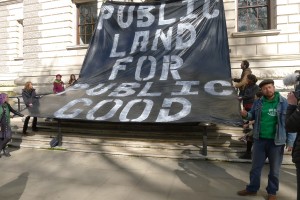 The Landworkers’ Alliance (LWA) will be staging a high profile direct action in central London at 4pm on Sunday 17th April to highlight the continued sell off of publicly owned farmland and council housing under the Government’s austerity programme. The action is taking place as part of La Via Campesina’s ‘International day of Agrarian Struggle’ that will see co-ordinated actions across more than 70 countries highlighting threats to the livelihoods of 200 million ecological and family farmers worldwide.

The LWA’s action will focus on the 9,500 acres of publicly owned farmland and 219 working farms that have been sold by local councils since 2010 under pressure from the Government to raise capital and meet fiscal deficits. The sell off of the public farmland estate is part of  £37bn of privatization sales made by George Osborne since 2010 under which public food and farming assets have been regarded as any other commodity to be bought and sold.

‘Council owned farms have traditionally played a vital role in providing successive generations with a first step on the farming ladder’ says Humphrey Lloyd of the LWA, ‘the loss of eight percent of the public farm estate over the past five years has had a massive impact on new entrants into farming and has turned public resources for the many into private wealth for the few.

‘We would like to point out that the continued privatisation of this essential public resource is proceeding with no public consultation whatsoever and shockingly little media attention. Food and farming are not like “any other commodity” and should be protected as Public Land for Public Good.’

The action is supported by the Tennant Farmer’s Association and will be addressed by TFA chairman George Dunn. It will be attended by LWA members from across the UK and will be accompanied by speeches from LWA members and tenant farmers who have been affected by Country farm sell offs.

Photo Opportunity: The action will provide an iconic photo opportunity. The location of the action is embargoed until 3pm on Sunday 17th April when it will be made available via the LWA press team.

The Landworkers’ Alliance is a union of small-scale producers and family farmers who produce food, fuel and fiber. We are a member of the international peasant farming movement La Via Campesina that represents 200 million farmers around the world. We campaign for the rights of small-scale producers and lobby the UK government and European Parliament for policies that support the infrastructure and markets central to our livelihoods