Home » Effects of the war on Lebanese agriculture

Report of the syndicate of lebanese farm workers – Hassan Abbas
The most important  nutritive products in lebanon are :
In Bekaa : Wheat and vegetables
In the south : all kinds of citrus,  bananas, vegetables, plastic houses and tobacoo
In the mountains : apples, and all kinds of fruits 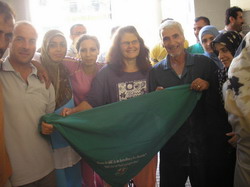 Via Campesina delegation with displaced farmers from South Lebanon

In Lebanon, there are around 600.000 farmers, some of them are farmers owning small lands, and others work on lands  they do not own. The Sydicate of Lebanese Farm Workers is in contacts with around 30.000 farmers.

The most important damages caused by the Israelian war, are following:
–     A lot of southern areas that were under military attacks  are the most damaged, more that other areas.  Because of the war, these areas have lost their crops. Farmers who were working every day on their lands have left their farms searching for more secure places. This makes that around 15.000 farmers suffered heavy losses due to this war.

–     A lot of factories  to produce Yogurt and Cheese, were damaged or completely destroyed.

–     Not only the farmers were harmed but also the fishermen. The water pollution because of oil and the continuous existence of Israelian armed ships in the Lebanese waters made it impossible for the fishermen to resume their work.

Finally, and in addition to all that we have mentioned, we must not forget the bad financial circumstances, which have been caused by this barbaric war. A lot of farmers are no more able to satisfy their needs or their families after they have lost their work and harvest.