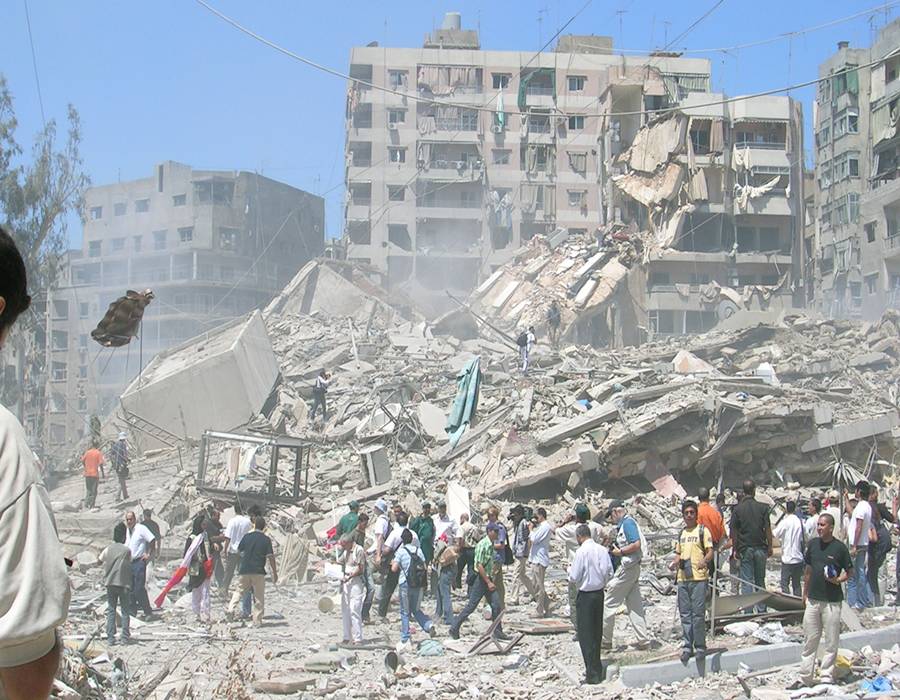 La Via Campesina is an international organisation working in defence of small farmers, fishermen and women, landless and agricultural workers.  This movement includes over 130 organisations and represents tens of millions of farmers.  It fights against the neo-liberal model of globalisation that places economic interests over and above social and environmental conditions.

La Via Campesina has participated with two delegates* in an international mission of solidarity with the people of Lebanon. The mission was organised in response to appeals from several Lebanese organisations. Twelve representatives of social movements, unions, human rights organisations and unions as well as members of parliament are part of this mission.

La Via Campesina was in Lebanon to meet the social movements, to visit the area, to witness and to make known the terrible consequences of this war for the population. We also want to give our direct support to the organisations of civil society which are confronted which the destruction of their country and the dramatic effects for the population. La Via Campesina is especially concerned about the consequences for peasants and agricultural workers in the South of the Lebanon who are heavily hit by this conflict.

The delegation has met different political parties that support the resistance in Lebanon as well as Hizbullah. Other meetings have taken place with Lebanese social movements (anti-war movements, environmental organisations,….), the president of the Republic M. Emile Lahoud and representatives of the External Affairs Committee of the Lebanese Parliament and members of the group led by Nabil Berri, president of the Parliament.

The delegation has visited the heavily bombed suburbs of South Beirut. Two hours after the departure of the mission other bombings took place. The delegation met wounded in a hospital as well as displaced persons that had sought refuge in a school.

Part of the La Via Campesina delegation made use of the cease-fire to go to Saida, about 40 km South of Beirut in order to meet peasants of the Organisation of Lebanese Farm Workers.

All the political forces and organisations that we have met have insisted on the fact that the Israelien aggression had nothing to do with the kidnapping of the two soldiers by Hizbullah but was planned already months before by the United States  and its ally in the region, Israel, who only needed a pretext for their agression.

We were able to observe that the vast majority of the Lebanese population supports the armed resistance, mainly by Hizbullah but also by other groups. The civil population also resists actively through its unity in times of crisis –  thereby resisting one of the objectives of this aggression aimed at the fragmentation of Lebanese society. Its resistence is also shown through the will to make a joint front against the chaos caused by the war, through mobilisation of solidarity helping the million of displaced persons and through preventive actions that have avoided an even bigger humanitarian catastrophe for the whole of the country.

In the Lebanon there is only one general peasant union, non confessional and independent of political parties. This is the Union of Lebanese Farm Workers that have explained to us that the South of Lebanon has been devastated by the bombings. As much as 70% of the animal and vegetal production has been destroyed (sheep, goats, cows, bananas, coffee, tobacco etc.) as well as numerous houses if not entire villages.

La Via Campesina not only defends the right to justice, equality and solidarity for farmers, but for all people. That is why during the big international gatherings such as the World Social Forum  and other spaces of struggle (such as mobilisations against  G8, WTO, World Bank and IMF) and in its efforts to build alliances, La Via Campesina works with the international social movement to form a front of  resistance to neo-liberal ideology and to promote alternative policies.  When people are assaulted economically or militarily, as in the case of the Lebanese, we must respond with solidarity and a call for resistance.

Together with others of the social movement, La Via Campesina denounces the agression against the civilian population and demands an immediate halt of the war, the retreat of Israeli forces from Lebanon, and the placement of an international peacekeeping force under the direction of the United Nations.

All hostilities must stop in order to facilitate a solution by the way of negotiation which recognizes the rights and the needs of all people touched by this conflict.  We can never accept a military way as a solution to the conflict.  A return to the negotiating table for an overall agreement is the only solution.

All people have the right to live in peace with the full recognition of their fundamental rights.