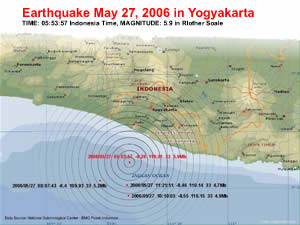 Saturday morning (27/5) at 5.50 AM, 5.9 Richter scale earthquakes shaken the quite morning in Jogjakarta and some regency surround (600 kilometer eastern Jakarta). People have just awakened from their bed and just started preparing their day on the weekend. Women were in the kitchen preparing breakfast, and small kids still in their bed. Until in a sudden, people feel like if the sky would collapse. The tremor was getting harder and dropped tiles from their roof, and the wall collapsed. People were buried in their house, some were injured but many other died. Until today it was reported that more than 5010 people died, 13386 houses in rubble, and infrastructure (road, bridge, market, electricity station) were damaged. The process of searching people buried in rubble is still taking place until this afternoon (29/5). 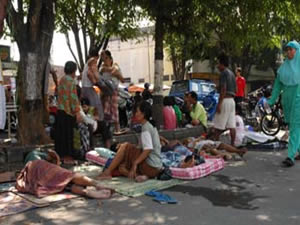 Just after the earthquake people went to panic as scared of the possibility of tsunami attack. They went to the hilly area running and riding any kind of vehicle (bicycle, motorbike, car, truck).  Fortunately, the tsunami did not occur and people told to back home.

Jogjakarta is a dense population area and most of the people housing are collapse. Until last night people are still afraid of the possibility another earthquake, and the sleep in open sky, despite they have no more house. Worse, the rain down poured last night makes the people injured in bad weather. The hospitals in the city could not accommodate people injured and let the patient mostly wounded and crack their bone laying in the corridor and car parking area with minimum medicine.

Relief from many parties were sent, but still in lack coordination and the victims gathered in the street begging for donation from the passerby or the passenger of the cars passing by. But victims in the rural are far from any kinds of aids in term of medicine, food and shelter.

La Via Campesina and Federation of Indonesia Peasant Union (FSPI) secretariat in Jakarta was not attacked by the earthquake and all the staffs are safe. Now FSPI has established 3 coordination posts of information and relief for the earthquake in Jogjakarta.  FSPI also already sent humanitarian mission bringing relief, particularly for the victim living in the rural areas. While the collection of donation and relief also has started in every regional secretariat of FSPI in the country. From village to village, door to door of peasant house across the country, farmer giving their support in kind of money, rice, food, clothes and other aids stuff as solidarity and sympathy to the survivors.
For more information please contact: