My country – Mozambique – is one of those African countries in which the consequences of colonization, neo- or re-colonization, and structural adjustment programs are visible. There is a growing number of poor people living in rural areas without basic public services like water, health services and education, while our main urban centres are showing a concentration of wealth in the hands a small group of people. The suburbs are becoming more crowded than ever, and everyday life is a big challenge. 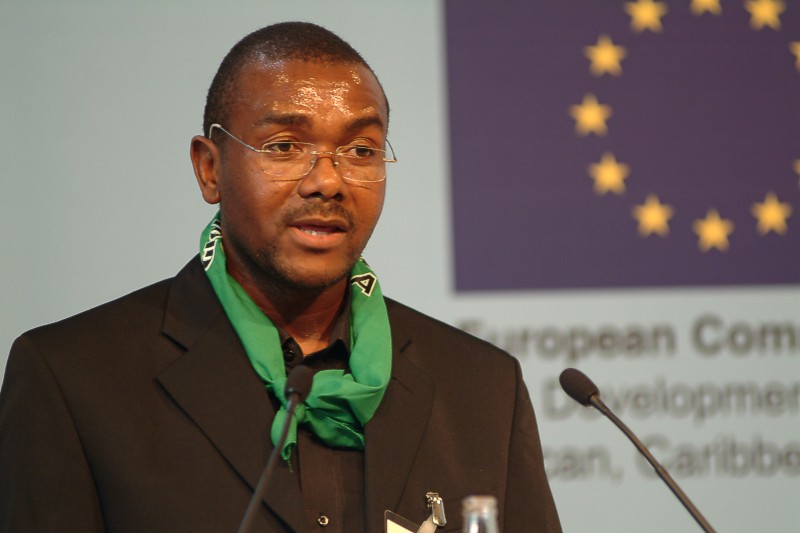 If we look at the kind of agriculture policies that are being proposed for our countries today, we do not find any reason to believe that there is real interest in tackling the root causes of poverty or in promoting broad-based rural development. The economic structural adjustment programs have severely weakened our agriculture economies. And now, the Economic Partnership Agreements are a weapon that has the potential to destroy our local markets for agriculture products. While the green revolution may result in increased production of a few food items, it is not without its social and environmental costs. There is considerable evidence that the green revolution benefited those farmers who could afford the technology, at the expense of poor farmers who could not. This led to increased landlessness as poor farmers became indebted and lost their holdings, increased migration to the cities and the paradox of increased hunger. Despite the claims of increased food production, widespread hunger still persists in the countries in which it was implemented, although a number of them have food surpluses for significant exports. The irony of our global economy is that food flows through trade from areas were people are hungry toward areas where there is money.

Land access by peasant farmers is crucial for the development of agriculture in Africa. In Mozambique we were successful in passing land legislation that could assure land access and control by peasant families. However the spirit of this legislation is being restrained a lack of agricultural policies that would support peasant and family farm agriculture. We cannot talk about the access and control of land by the poor, if such access and control is not accompanied by appropriate measures that assist farmers to produce food for local markets; what we call policies for food sovereignty. The development of agriculture and rural areas require the state’s commitment to assure that pro-peasant and pro-family farmer policies are implemented that promote sustainable peasant based agriculture.  Sadly, current policies in most countries favour large export producers and hurt peasant producers of food.  It is urgent that we reverse such misguided policies.

I would like to call your attention to the ICCARD declaration that states that, and I quote: “policies and practices for broadening and securing sustainable and equitable access to and control over land and related resources and the provision of rural services should be examined and revised in a manner that fully respects the rights and aspirations of rural people, women and vulnerable groups, including forest, fishery, indigenous and traditional rural communities, enabling them to protect their rights, in accordance with national legal frameworks.”  In Via Campesina we support this statement by the world’s governments and demand that they make it a reality.

The ICARRD statement goes on to say that:“Agricultural policies need to find balance between national policy space and international disciplines and commitments. Indeed, agricultural policies are an important tool to promote land and agrarian reform, rural credit and insurance, technical assistance and other associated measures to achieve food sovereignty and rural development.”  Here we would like to say that food sovereignty policies are far more important for the well-being of our peoples, than living up to certain types of negative international commitments, like those in the WTO’s Agreement on Agriculture, which hurt peasant and family farmers.

In today’s Africa, free trade agreements have made it easier for private traders – the only buyers and sellers of food left now that the marketing boards are largely gone – to import subsidized food from rich countries, than to negotiate with thousands of small local farmers, driving local farm prices below the costs of production. Faced with this negative panorama, peasant families in Mozambique and across the continent are abandoning agriculture in search of low-wage jobs in urban slums and in the international migrant stream.  This is the sad reality, and EPAs can only make this worse.

Our country, like other African countries, has become highly dependent on foreign budget support over the last 20 years. This funding was generally directed to implementation of an agenda based on policies directed towards the liberalization and privatization of the country’s economy. During all these years, almost nothing was directed to agriculture, especially peasant agriculture. Places that were once our green and productive lands, are now abandoned by farmers , and are becoming unproductive deserts.

Today’s rural life has been devastated by years of free trade and anti-peasant policies imposed on our governments by their bilateral and multilateral allies. The forced privatization of food crop marketing boards – which, though flawed, once guaranteed African farmers minimum prices and held food reserves for emergencies – and the closure of rural development banks, which gave farmers credit to produce food, have left farmers without either financing to grow food or buyers for their produce.  We are living a policy-driven disaster.

What kind of aid does Africa needs? Not dumping of food aid by rich countries that destroy local efforts to produce; not the imposition of industrial-style agriculture – based on chemicals and “high-yielding” seeds – in our countries, with the paradoxical outcome of greater production of a few food crops, accompanied by even worse hunger, and by environmental degradation. Pesticides and chemical fertilizers eventually degrade the soil, leading to declining productivity, and the high cost of those inputs will deepen the divide between rich and poor farmers, swelling the ranks of the hungry.

Developed countries have many experiences of the negative impacts of mono-culture, and of GM crops, however this same methodology is being promoted in African countries such as Moçambique – why? We must learn from the lessons of the past, and be innovative and courageous in our aid and agriculture policies. If not, the errors of the past will simply be replicated, and small holder farmers will become even more impoverished, all in the name of globalization.

It is important to recognise the difference between “development” and advancement in technological terms. Technological advancement does not necessarily equate to improved standard of living for poor rural peasant farmers – more often than not it further entrenches their impoverishment. Technology is not always the panacea.

One alternative that is left to fight poverty on the Continent is the proposal that comes from the movement of peasants, indigenous, migrants, women and rural communities, confirmed during the international forum held early this year in Mali: that is Food Sovereignty. Food sovereignty is the people’s right to healthy and culturally appropriate food produced through ecologically sound and sustainable methods, and their right to define their own food and agriculture systems. It puts those who produce, distribute and consume food at the heart of food systems and policies rather than the demands of markets and corporations. It defends the interests and inclusion of the next generation. It offers a strategy to resist and dismantle the current corporate trade and food regime, and directions for food, farming, pastoral and fisheries systems determined by local producers. Food sovereignty gives priority to local and national economies and markets and empowers peasant and family farmer-driven agriculture, artisanal – fishing, pastoralist-led grazing, and food production, distribution and consumption based on environmental, social and economic sustainability. Food sovereignty promotes transparent trade that guarantees just income to all peoples and the rights of consumers to control their food and nutrition. It ensures that the rights to use and manage our lands, territories, waters, seeds, livestock and biodiversity are in the hands of those of us who produce food. Food sovereignty implies new social relations free of oppression and inequality between men and women, peoples, racial groups, social classes and generations.

Lastly, please allow me to urge the EU and this Forum to support the declaration of the International Conference on Agrarian Reform and Rural Development (ICARRD) of the Food and Agriculture Organization of the United Nations declaration, and to fully support its implementation, as an important guideline for the future of Africa and rural areas around the world.