Home » Defending peasant seeds is fighting for our right to life 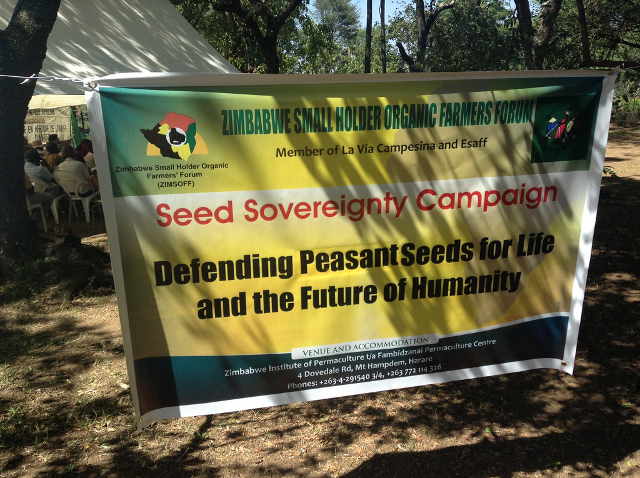 We, African men and women farmers, members of La Via Campesina, have gathered at the Fambidzanai permaculture centre in Zimbabwe from the 12th to the 14th November to discuss and prepare our work for the defence of African peasant seeds against the current corporate and institutional attacks.

For us, small-scale farmers, seeds are the foundation of life. They are a key part of cultures developed by past generations and carry the acquired knowledge of farming communities worldwide. They are part of a constant process of recreation. Peasant seeds are the heritage of the peasant communities who use them to feed the world. They are the basis of our food sovereignty. Without seeds farmers have no autonomy.

The future of peasant based seeds is at stake. Over the past 20 years, Transnational Companies (TNCs) have taken increasing control over seeds. As a result, the diversity of seeds is disappearing at a rapid rate, jeopardising access to them for future generations.

The attacks on farmers’ seeds systems and peasant rights are increasing on our continent. We are now at a very crucial moment as this threat on our autonomy is taking different forms.

We reject the push for technologies within the frame of the green revolution. This paradigm depends strongly on uniform, privatised seeds and external, contaminating inputs. It is yet another attempt of TNCs to conquer new markets. As Africans, we refuse to be the new playfield of agribusiness and become seed slaves for the corporations. Uniform seeds make farmers dependent and offer no guarantee of higher incomes or yields. GMOs are pushed on farmers and consumers who do not want or need them. We also reject the immoral and dangerous Terminator seeds that are genetically engineered for seed sterility, thus destroying our ability to save seeds.

We reject all intellectual property rights on living beings, as pushed via UPOV or similar unfair laws. Particularly, we reject the introduction of seed laws that criminalise the age-old farmer practice of resowing and exchanging seeds including the laws now being pushed in Africa through ARIPO (African Regional Intellectual Property Organization), COMESA (Common Market for Eastern and Southern Africa) and SADC (Southern Africa Development Community).

The allocation of donor money to the promotion of agribusiness and green revolution is turning certain NGOs and donors into simple service-providers for TNCs.

We recognise that women are protagonists when it comes to conserving, selecting and exchanging seeds. They are the beholders of our traditional knowledge.

Based on our discussions we, small scale sustainable farmers, have developed the following demands:

– the respect of peasant’s’ rights to sow, conserve, sell and exchange seeds

– consultation and participation in decision-making on all ongoing policy negotiations pertaining to seeds, the patenting of life and intellectual property rights

– the prohibition of GMOs on fields and in food

We, small scale sustainable farmers of Africa are committed to claiming our space. We will make the work that we do in our fields more visible. We will continue to unite our forces and expand our bases. We will stand up and defend our seeds.

We will develop the following actions:

– training and knowledge-sharing at the political and practical levels

– dissemination of information, working together with our allies.

– production of materials in vernacular languages for our members

For the defense of our Peasant Seeds and for Humanity