LVC Africa News from the continental meeting on seeds 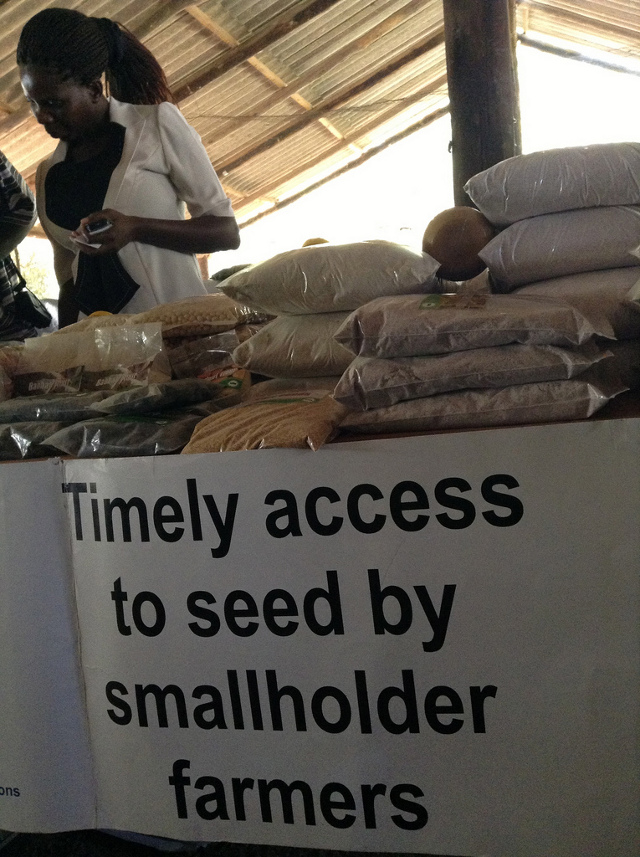 (Harare, November 14, 2013) At the African seeds meeting in Harare, Zimbabwe, November 12-14, peasant farmers held rich discussions about the growing threat of external investment in African agriculture, including multinational seed companies and ongoing efforts to exploit African land and resources for the production of food for other parts of the world.

Participants at the meeting expressed alarm about the push for industrial agriculture throughout Africa by corporations and their partners, including initiatives such as the Alliance for a Green Revolution in Africa (AGRA), the G8 New Alliance on Food Security and Nutrition. Some African states are supporting similar initiatives through the African Union, the New Partnership for Africa’s Development (NEPAD) and the Comprehensive African Agricultural Development Program (CAADP). Africa was bypassed by the first Green Revolution – the introduction of hybrid seed, synthetic agri-chemicals, irrigation and credit – that resulted in massive loss of farmers’ seed diversity in other parts of the global South.

African peasant farmers reject this model of industrial Agriculture. To win the battle government policies must support farmers. Although an increasing number of African governments are on the side of the multinational corporations, the government of Zimbabwe appears to be opening doors for collaboration with smallholder farmers. In his opening speech at the African Seeds meeting, in Harare, a government official, representing the Ministry of Agriculture, stated: “We are attracted to the concepts and practices of agroecology and food sovereignty and would like to work in partnership with ZIMSOFF and La Via Campesina to take these forward”, he said.

The Government of Zimbabwe understands that “agroecology as an approach to farming is very modern while at the same time recognizing the wisdom of traditional practices”.

To invest in Africa, agro’industrial corporations demand a fundamental restructuring of seed laws on the continent to allow for certification systems that not only protect certified varieties, but also criminalize all non-certified seed. In other words, these corporations want to outlaw farmers’ traditional varieties and the age’old practice of farmers who save and exchange seeds. Farmers see clearly that these efforts are oriented towards large’scale corporate seeds, with the goal of a tightly concentrated system where a few large companies control with intellectual property monopolies and seed laws that harmonize seed regulations across the continent. These are the institutional systems and structures that will allow private seed companies to control the seeds.

The seed law harmonization process in sub-Saharan Africa is pushing African governments to join UPOV 1991. The harmonization of seed laws restricts farmers from saving or exchanging protected seeds or using it to improve their local varieties.

The African meeting on traditional seeds noted that the multinational seed lobby has rapidly created a vast network of well-funded initiatives, institutions and agreements that are pressuring African governments to adopt PVP laws based on UPOV 1991. The players include: African regional trade blocs such as the Southern African Development Community (SADC) and Common Market for East and Southern Africa (COMESA); intellectual property agencies such as the African Regional Intellectual Property Organization (ARIPO); the World Bank; the United States Agency for International Development (USAID); Citizens Action for Foreign Affairs; and more…

Beatrice Katsigazi from ESAFF Uganda explained clearly when she said “we do not want nor need hybrid seeds.’ Women farmers have few resources and do not want seed that we can plant for one season only or seed that is owned by companies. We believe in our own seeds that we can access from our own collections or from our farmer networks, free of charge.”

Seeds are the very basis of human society and have been for all of human history. African seed systems have existed outside global capitalist markets apart from some enclaves or niches developed during the colonial era. The focus of these enclaves was on commercially viable crops, especially for export as part of the colonial system of extraction. Farmer-controlled seed systems in Africa are integrated and locally organized. They are based on local seed production – to feed local communities –involving on-farm breeding, seed-saving and exchange with farm neighbours. This is connected to food supply and distribution systems, for example through the use of a maize harvest for a combination of food, feed and planting.

African communities have developed their own systems of agriculture based on local knowledge and seed diversity that is helping them cope with extreme environmental conditions and political disasters. In Africa, farmers produce 80 – 90 per cent of our seed supply, which is recognized and valued for its rich diversity and the crucial role of women in maintaining this system. Traditional crop varieties are accessible and affordable. In today’s economic climate, this is a critical advantage. With farmer-based and controlled seed systems, farmers can avoid becoming dependent on expensive agricultural inputs. In addition, surviving climate change will not be possible without seed diversity controlled by farmers.

Corporations that are pressuring governments to adopt seed harmonisation processes are trying to undermine and destroy the contributions that farmer-breeders have made, and continue to make, to seed breeding, genetic diversity and food security.

What is clear is that seed harmonization laws are designed to replace Africa’s farmer-controlled seeds with industrial agriculture and a corporate controlled seed system.

According to Davine Witbooi, a farmer from the Food Sovereignty Campaign in South Africa, “the time for talk is over. It is time for action. We are not just sitting back and will do what is necessary to take back our rights and keep chemical agriculture out of our communities. We will re-double our efforts to conserve our traditional seed varieties and share knowledge between farmers in the region to improve agro-ecological techniques and train our young people.

“Juliana Mundwa a peasant farmer from Zimbabwe, and a member of ZIMSOFF feels the same way. She says that this meeting has highlighted the need for peasant farmers to stand up for themselves. “We will continue to collect, save and exchange our ancestral seeds.”

The meeting included about 60 farmers from different African countries, members of Via Campesina, together with international allies and seeds experts.