Home » COP21: The curtain falls on a masquerade 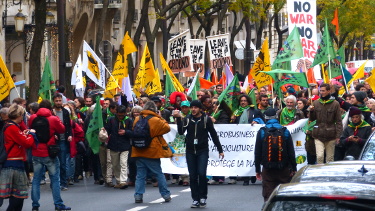 Paris, 12th of December 2015) After two weeks of heads of states taking centre stage to salve their consciences, COP21 has come up with an agreement that many worried in advance would offer nothing good for the peoples of the world. There is nothing binding for states, national contributions lead us towards a global warming of over 3°C—and multinationals are the main beneficiaries. It was essentially a media circus. However states know how to make binding commitments when it comes to signing free trade agreements. Those agreements threaten the democratic functioning of countries by merely serving the interests of multinationals. Once more, it is clear that money dictates the law, even taking precedence over the future of humanity.

“Despite multiple attempts to silence us these past few weeks, the social movements have made their voices heard today,” said Antolin Huascar, a peasant leader from Peru. “The future of the planet is in the hands of the people,” he added.

Peasants from across the world, from member organizations of Via Campesina, came together to warn others that the agricultural sector is being severely affected. While they are the guardians of a changing climate, they stressed that industrial agriculture is threatening their disappearance. At the same time, COP21 is further opening the door to financial speculation on nature, industrialisation of agriculture, and accelerating resource grabbing.

“We, the peasants of the world, will now return to our territories and farms all the more determined to continue our struggle for food sovereignty for all the peoples of the world,” Huascar concluded.

The masquerade may be over, but the peasant fight will only continue to gain momentum.