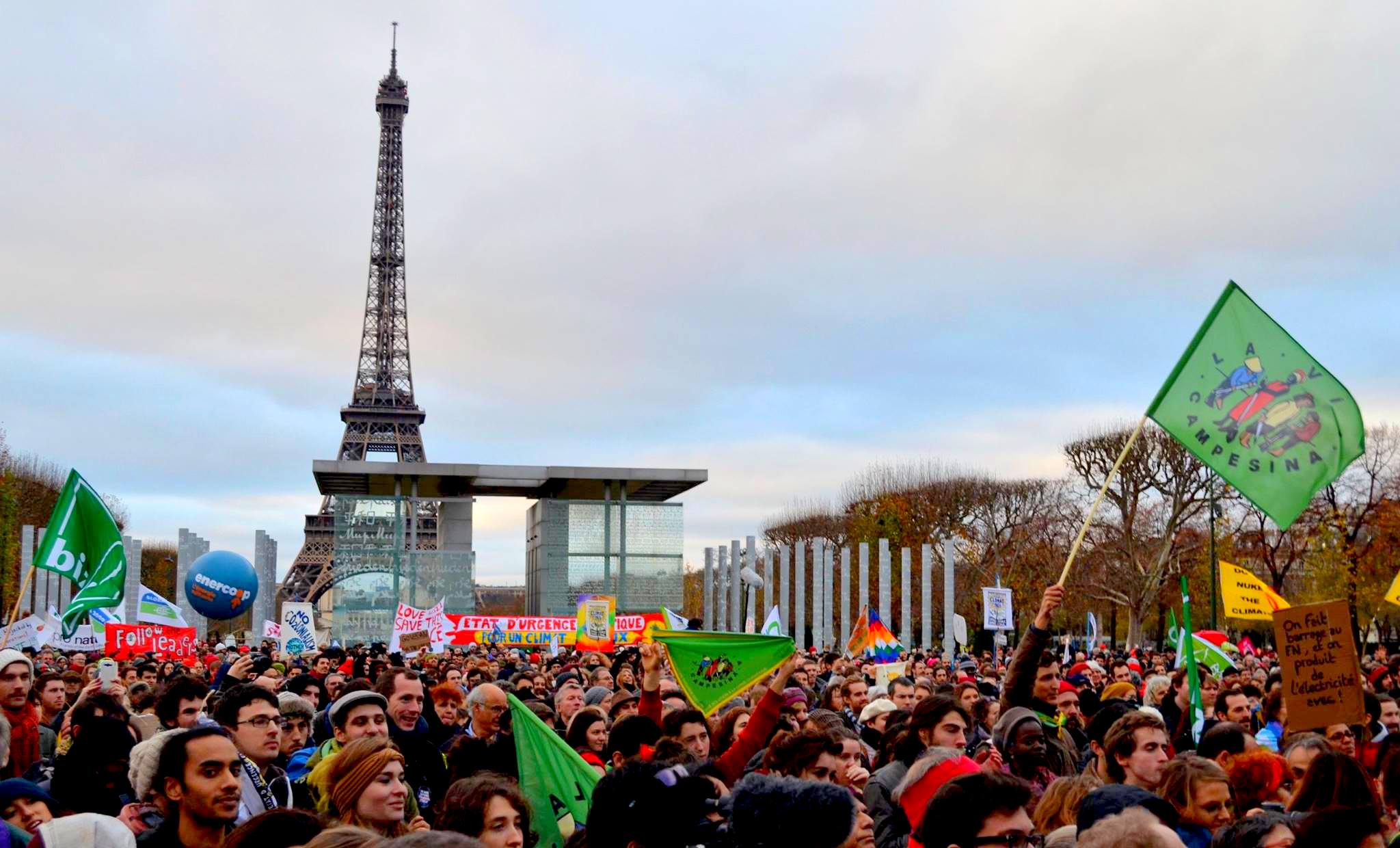 “We are the main victims of climate change—victims of an unjust system that is cruel, patriarchal and unsupportive. We will not let people wearing suits and ties to decide on our lives and the fate of the earth. Nature can live without us, but we will not survive without nature.”

These were some of the words of La Via Campesina’s mistica at the opening ceremony of People’s Climate Summit, a Global Village of Alternatives in Food and Agriculture held at Montreuil, parallel to COP21, in Paris. Surrounded by products from peasant agriculture and stalls from farmers of lConfédération Paysanne, a French member organization of La Via Campesina, the movement’s international delegation denounced false solutions to the climate crises. The world needs peasant and people’s voices to be heard, just as the world needs climate justice.

People’s Climate Summit was also the stage for a debate on how free trade is being used as economic doctrine around the world, contradicting peasants and Food Sovereignty.

While farmers were examining how Free Trade Agreements harm small scale agriculture around the world, at the conference “Free Trade: Peasant Agriculture and Food Sovereignty under threat!” organized by La Via Campesina, in South Korea, that same day, more than 15,000 farmers were in the streets fighting their own government’s free trade policies.

“The price of rice, the country’s main food and production, is decreasing rapidly due to low price imports resulting from Free Trade Agreements between the U.S., European Union and South Korea,” said Sora Ko, member of Korean Women’s Peasant Association (KWPA), a member organization of La Via Campesina. “And the Government is preparing even more agreements with China and TTIP, what will make it even more difficult for Korean Farmers,” she added. ,

The number of farmers has diminished drastically in South Korea, as Free Trade Agreements undermine their ability to sell their own production. They are unable to compete and often forced to abandon agricultural livelihoods. The land that farmers leave behind is being taken by big corporations that transform what were once small farms into “factories” of food, with growing use of agrofuels and high levels of pollutant emissions. “Free Trade Agreements are taking farmers off their lands and replacing them with big companies”, said Sora Ko, concluding, “We need to stop this devastating loop to stop climate change”.

According to the United Nations, there are more people migrating due to climate change than due to wars. But climate migrants don’t have legal protection, and need protection that will only come about under systemic change.

“Climate migration is real and is happening right now in Bangladesh,” said Alam. It is estimated that a third of the country will be underwater by 2050, adding to some 250 million climate migrants globally.

In Latin America, huge areas of land are being occupied by mining and monocultures of soy for agrofuels and for animal feed to export, forcing farmers to abandon the lands where they produced food and that are now taken by corporations. They are forced to look for job in different places, sometimes within their own country. According to Eberto Diaz, member of the Colombian union of agricultural workers FENSUAGRO, member of La Via Campesina, there are seven million people displaced in Colombia.

From the audience, migrants from African countries, such as Senegal and Mali, made it clear how the use of the word “forced” is related to their migration to Europe, and in this particular case, France. They were once farmers in Africa, but climate change has brought up the temperature, and at the same time reduced rainfall. When the rain does come, it can be erratic, damaging farmers’ properties. With no means to provide for their families, they found themselves forced to look for job far from their land and their families.

Taking over the chairs of corporate power negotiating at COP21

La Via Campesina, along with other organizations of the civil society committed to fight climate change, also joined the “196 Chairs Summit” at Montreuil. The 196 chairs (the same number as the countries negotiating at COP21) disposed in circles, in the middle of the peasants market, were “requisitioned” in bank branches to denounce the connection between tax evasion organized by banks and the lack of funding for climate.

Antolin Huascar, from National Agrarian Confederation of Peru, a member organization of La Via Campesina, sat in one of those chairs. Peasant voices may not be represented at the official negotiations, but in parallel spaces and in the streets, they speak truth to power in reclaiming the change that is needed to achieve climate justice and food sovereignty.