To solve the global warming crisis, multinationals are suggesting false solutions. Far from solving the problem they are contributing with their share of damages. A brief overview follows. This article is the first in a series of five to appear this week. 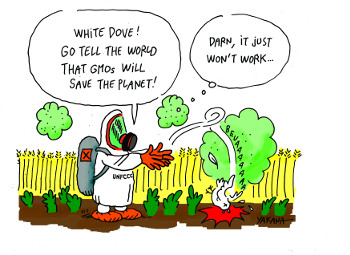 According to those who promote them, they are a wonderful dual-power technology. To start with, GMOs would have the ability to slow down climate change by: reducing the use of pesticides, which constitute a significant source of Green House Gases when they are produced and used; and by reducing tillage, which releases carbon emissions. What’s even better is that GMOs would allow us to have plants that resist droughts and floods, which therefore adapt to climate change!

In fact, GMOs’ tolerance to one (or many) herbicides or insecticides quickly develops resistance and makes plants adapt, which leads to many unwanted plants and pests appearing in fields. You therefore have to use even more pesticides to get rid of them!

Regarding the issue of no-tillage, it doesn’t make any sense and doesn’t have an impact if it is carried out using an industrial agriculture approach; which favors systems that don’t use crop rotation and where herbicides are widespread. In Argentina, no-tillage using Monsanto’s Round Up Ready soya beans has destroyed hectares of meadows and forests, therefore needing carbon sinks.

Adapting to climate change is the ultimate decoy. It is genetic complexity and rich natural biodiversity that allows nature to adapt, not its destruction!

GMOs belong to an industrial agri-food system that patents living beings, monopolizes peasants’ knowledge, halts and destroys peasant agricultural practices and the whole chain significantly releases Green House Gases and is devastating for the climate. So it is a great way to make profit off climate change whilst despising peasants!