Home » CETA is a bad deal for Romanian peasants and agroecological food producers! 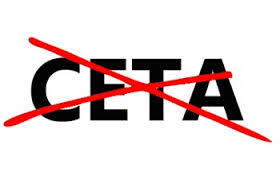 Cluj, 17/10/2016 – Between the 26th and 30th of October, 2016, Eco Ruralis will join together in Cluj-Napoca, Romania with hundreds of farmers, fishers, pastoralists, indigenous peoples, consumers, NGOs, trade unions, environmental, development, research and justice/solidarity/human rights organizations, community-based food movements and others who work on food sovereignty from the entire pan-European area of 42 countries. Our main purpose? The 2nd European Forum on Food Sovereignty – Nyeleni, where we will enhance existing food sovereignty initiatives and strengthen our work at local, national, regional and global levels.

While we struggle to build fair agricultural and food systems in Romania, European and Romanian decision makers seem ready to give up on healthy and local food production for the benefit of multinational corporations and disastrous economic free trade agreements (FTAs).

Free trade agreements such as the Comprehensive Economic Trade Agreement (CETA) are designed to benefit big corporates while eliminating millions of family and smallholder farmers.[1] Since the adoption of FTAs all over the globe we have witnessed a drastic decline of numbers of peasant farmers as their local markets and farmland are taken over by big corporates.

Nature has not been spared either as FTAs compromise environmental protection and animal welfare. Moreover, free trade agreements through contentious Investor-State Dispute Settlement (ISDS)[2] mechanism erode the sovereignty of our state and leave us at the mercy of big transnational corporations (TNCs).

This is why, before this destructive agreement might be signed on the 27th of October during the EU-Canada Summit, Eco Ruralis calls upon the Romanian Government to commit to build fair and inclusive public and institutional procurement programs which allow peasant and agroecological farmers to access to stable, participatory and remunerative markets for farm produce.

Also, we want the protection of our peasant and traditional seeds and their use as the fundamental basis of an autonomous, family-based agriculture. We strongly oppose to the “Monsanto Laws” outlined by CETA based on industrial approaches of the International Convention for the Protection of New Varieties of Plants (UPOV).[3]

These laws impose patents that prohibit the conservation, use and multiplication of our farm-saved peasant seeds. These standards are not our standards! They are merely opening the roads towards monocultures, more financial gain for greedy seed corporations and destructive agroindustry.

Our resistance is directed at rejecting all forms of appropriation and privatization of seeds which during the past few years have led to new laws and especially an attempt to impose the UPOV agroindustrial agenda in Romania.

Romanian citizens, especially peasants and other agroecological food producers have to be told the truth about how free trade agreemenrs like CETA would affect Romanian food production and farming!

Stela Zamoiu, peasant farmer from Eco Ruralis highlights: “No, not in our name! Romanian small food producers and conscious consumers do not want to depend on industrialized food coming from far away factories instead of local family farms. Therefore, we have to stop negotiating agriculture in so called free trade agreements and work together to realize food sovereignty in Romania.”

[1]Why do we say no to FTAs? Via Campesina

[2]ISDS is a mechanism that allows investors to sue states if any action (a new regulation, administrative decision or court ruling) by this state diminishes the investor’s profits – even profits that they expected to make in the future.

[3]UPOV is the French acronym for the International Union for the Protection of New Varieties of Plants. Officially an intergovernmental body since 1961, it as worked exclusively and explicitly for the privatization of seeds around the world by imposing intellectual property rights on plant varieties. Member states must join the UPOV Convention, and write it into national law