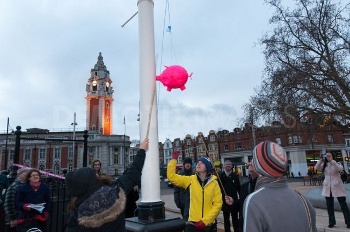 Brixton responded to the world-wide call by global peasants organisation La Via Campesina for ‘Thousands of Cancuns for Climate Justice’ to mobilise grass roots solutions and actions. London, UK.

It was a small gathering that took place at Brixton Oval on a chilly winter afternoon, with an exhibition including posters from the Heathrow Climate Camp, several based on the book Six Degrees: Our Future on a Hotter Planet by Mark Lynas and a poster produced by the local climate justice group group illustrating the global links between the war in Iraq, rainwater contaminated by Texaco/Chevron in the Amazon rainforest in Ecuador and a petrol station in Brixton displayed on the railing around the disused public toilets, unfortunately not restored in the recent bare, open and soulless refurbishment of Windrush Square.

The call came following the Cochambamba People’s summit for climate justice held in April this year, a much larger event than Cancun, with around 40,000 people from around the world attending. The ‘Cochabamba People’s Agreement’ which came from this was brought to Cancun by the Bolivian government, but its concrete proposals were rejected in favour of an agreement which accepted the empty gestures of the wealthy nations and gave them new loopholes to avoid effective action.

The Brixton event was one of roughly 70 around the world but was the only one listed for the UK. One of the speakers had attended the Cochambamba summit and told us about her experiences there. Other speakers included one from the World Development Movement and a speaker from the Global Women’s Strike. She emphasised the pivotal role of women in much of the world’s economy and the need for this to be taken into account in developing appropriate solutions to social injustice.