In a statement issued on National Peasants’ Day ( 27-September-2017), Serikat Petani Indonesia – the Indonesian Peasants’ Union – demanded that President Joko Widodo (Jokowi) must immediately strengthen the agrarian reform agency at the local-to-central level and brings the program under his direct command.

Chairman of Indonesian Peasants Union (SPI) Henry Saragih, while speaking at the 2017 National Peasant Day in Jakarta , also reminded that the agrarian reform program is amongst the commitments under the National Medium Term Development Plan for the period 2014-19.

“This is a remarkable thing, because since independence Indonesia has never done such a great agrarian reform.”

The Peasants Union insists that such a radical program be backed by strong organisational efforts and supported by equally extraordinary people. “Just as President Jokowi has paid tremendous attention to infrastructure development such as roads, ports, etc… similar focus, energy, funds, organizational backing and strong leadership be also given to implement agrarian reform”. Henry demanded.

“Unfortunately this isn’t happening right now. Agrarian reform is treated as if it only means certification of land. That is not Agrarian Reform, but only providing a legal basis to land that has already been controlled by the people,” he said. 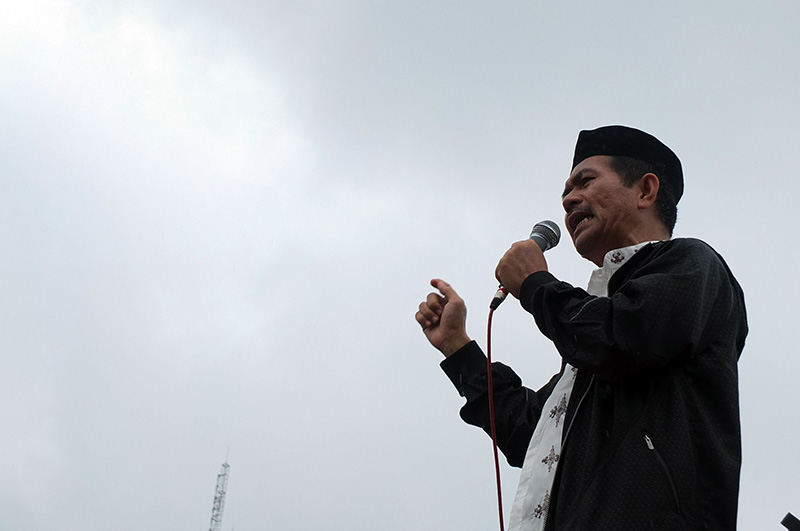 Chariman of SPI, Henry Saragih, speaking at the event

SPI urges the President to form a powerful agrarian reform body, and a strong legal foundation to implement it. This is so that the land that becomes Land Object for Agrarian Reform (TORA) is identified and allotted to peasants.

“For instance, in Java Island, where majority are landless peasants and nearly 60% hold less than 0.3 hectares of land – the mentioned land in TORA is not available. Therefore, the President must issue a policy stipulating that the area identified for agrarian reform is located in Java Island as well as outside Java Island “, he explained.

The peasants’ union also alleged that during three years of Jokowi’s administration, implementation of agrarian reform has been slow. “It is important that in the remaining two years of the ruling government’s current term, this program is given serious attention. We don’t want it to get stalled later on. The government must also immediately resolve the growing rural conflicts in agriculture, where the big companies are grabbing people’s land for plantations, tourist areas and real estate,” he added.

“This is the promise of President Jokowi. We will come again, mobilise in very large numbers if our demands are not fulfilled,” he concluded.

Meanwhile, the 57th Anniversary of the National Farmers Day was attended by 60 CSOs and institutions under the committee along with the National Committee for Agrarian Reform (KNPA). SPI peasants also conducted several actions in various regions throughout Indonesia.