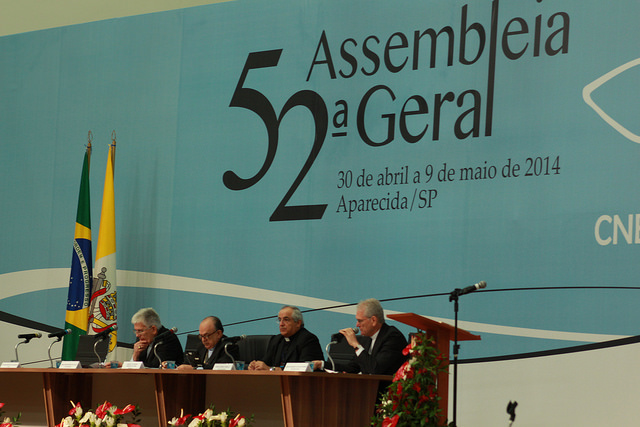 (Aparecida do Norte, May 10, 2014) Between 30 April 2014 and 9 May 2014, Catholic bishops across Brazil gathered for the annual General Assembly of the National Conference of Brazilian Bishops (CNBB), in Aparecida (SP). At the meeting, a significant document on the country’s agrarian question was analyzed, discussed and approved.

This document has been in preparation for the last five years and addresses the current reality of the country; it addresses the challenges ahead and proposes alternative solutions, all based on the Church’s doctrine. The 44-page document was approved unanimously and will soon be made public.

In the document, the bishops make clear their strong disapproval of genetically modified seeds and the corporate control of food, which objectifies food to obtain maximum profit. The government is also to blame for failing to limit the privatization of the country’s water sources.

Below are excerpts from the document referring to these issues:

From the Church’s document on the Brazilian agrarian question in the beginning of the XXI century Approved at the Bishops’ General Meeting, 9 May 2014, in Aparecida do Norte, Sao Paulo.

178 – Public power should provide economic incentives to initiatives that aim to preserve nature, in particular the Amazon and the Brazilian Cerrado (tropical savannah region). The struggle of small farmers should be recognized and rewarded for its benefits to the whole of humanity.

179 – Despite the approval of the national Biosafety Law, it is our pastoral duty to engage ourselves against the planting and commercialization of genetically modified seeds. The studies on their impact on human health and their collateral effects on species biodiversity are at the very least inconclusive.

182 – We fear the big grain traders whose main goal is to make profits. Their control could be expanded to the whole food chain. This is a real threat to food sovereignty and food security, and it will increase farmers dependency as well as exclude peasants and poor farmers.

183 – The government’s refusal to admit water as a human fundamental right is unacceptable. Human Rights cannot be subject to political vagaries or to pressure from private companies wishing to make water a business.