The Asia Agroecology and Climate Justice Encounter, which comprised several members of La Via Campesina (LVC) in the Asian continent took place in Sri Lanka from 11-13 June.

The encounter was hosted by MONLAR, a member of LVC, and witnessed over 60 participants from East, South East and South Asian countries share their regional and local experiences of agroecological practices and its role in mitigating the climate crisis that is plaguing the world.

The objectives of the encounter were

On the opening day, Geumsoon Yoon of Korean Women Peasant Association (KWPA) and Yudhvir Singh of the Bhartiya Kisan Union (BKU), who are both members of the International Coordination Committee of La Via Campesina (ICC-LVC) set the context by highlighting the massive crises that the rural economies are faced with and how revival of agroecological practices and cross border sharing and exchange of knowledge between peasants can play a crucial role in advancing food sovereignty in all regions.

The members also debated the dangers of co-option that agroecology faces from the agroindustry and resolved to defend peasant agroecology from appropriation by the free market forces.

Academics and representations from our allies such as GRAIN and Focus on the Global South also provided crucial inputs during the encounter – with their presentations about seed laws, intellectual property and patent regimes, genetic erosion, threats to biodiversity and dangers of climate smart solutions and more.

During the first two days, the participants also looked at ways of building local, regional and international solidarities that would help strengthen the agroecology models that peasants practice in each regions and also aid in easy knowledge exchanges between peasant communities. They spent considerable time in reflecting upon the opportunities, strengths and threats to peasant agroecology in different regional contexts and resolved to develop a coherent strategy within the movement to promote agroecology as a means to achieve food sovereignty. 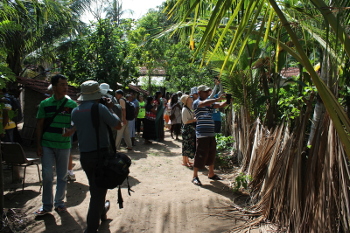 On the third day participants visited more than nine farm sites to observe first-hand various home gardening project implemented by MONLAR in the coastal saline dry land areas in Vennapuwa and Modarawella. This was the first time that these households, mostly fisherfolk, had ever cultivated anything in what is considered to be barren land. In fact, their gardens were diverse, full of edible and ornamental plant species and animals like fish, chicken, and cows. In some areas where there was a intensive soil erosion going on, the farmers had managed to implement remedial measures such as coconut husk walls, mangrove plantations, among others. 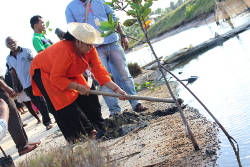 The group also visited a federation of small farmers who have gotten together to the reforest mangroves in order to protect coastal regions from excessive erosion and to bring back the aquatic life. These mangrove species also serve as important sources of medicines. At the end of the day participants went on a mangrove afforestation drive in a lagoon ecosystem where shrimp farmers made their livelihood.