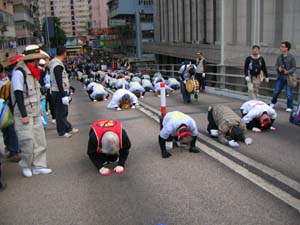 The Hong Kong road between Victoria Park and the Convention Centre is full with people right now, because around one thousand peasants marching the “monk walk” to reach the WTO negotiators from 149 countries. It is slow march practiced my Korean monks: they walk 3 steps and then bow to the ground. It symbolises how difficult it is for the farmers to live with free trade policies. The farmers of La Via Campesina, the biggest farmers delegation in Hong Kong, came to Hong Kong to protest against the WTO meeting.

Park Min Ung the secretary general of Korean Peasant League said that
the “Korean Farmers are not violent. They just want to show how is their anger. Because WTO has killed many farmers”.

Many leaders and farmers of La Via Campesina from all over the world have joined the monk walk, like Henry Saragih of Federation of Indonesia Peasant Union ,
Veraphon Sopha of Thailand Assembly of the Poor, Alberto Gomez of UNORCA
Mexico, Rafael Alegria of Honduras, and the anti-globalisation French activist José Bové.

The rally has not finished yet, because when the front group has
reached the Convention centre the tail of the rally has just left
Victoria Park. Women peasants had a just finished their rally when the peasant monk walk started.

La Via Campesina demands “no deal and WTO out of agriculture”.