Home » Accelerating into disaster  when banks manage the food crisis 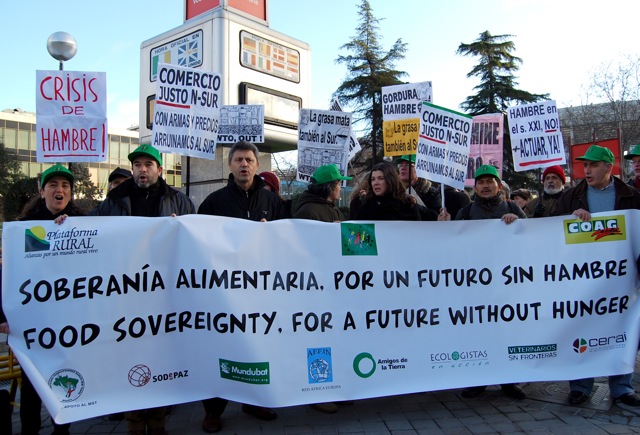 Against the dramatic background of a profound global food and general economic crisis the Spanish government organizes the “High Level Ministerial Meeting on Food Security for All” on the 26-27th of January 2009 in Madrid.

The emergency of today is rooted in decades of neo-liberal policies that dismantled the international institutional architecture for food and agriculture and undermined the capacity of national governments to protect their food producers and consumers. The central cause of the current food crisis is the relentless promotion of the interests of large industrial corporations and the international trade that they control, to the detriment of food production at the local and national levels and the needs and interests of local food producers and communities. At the World Food Summit in 1996, when there were an estimated 830 million hungry people, governments pledged to halve the number by 2015. Today, in the midst of a terrible food crisis, the figure of hungry people has risen to well beyond 1 billion.

Stop land grabbing for agrofuel and industrial food production
In this context the World Trade Organisation (WTO), World Bank and the International Monetary Fund (IMF) are pushing for more trade liberalisation, more support for agribusiness and increased sales of fertilizers and genetically modified seeds. As the vicious food price crisis deepens, transnational companies are moving into southern countries on a huge scale and starting to capture millions of hectares of land in order to bring agricultural production further under their control for industrial agrofuel and food production for the international market. Millions of peasants will be pushed out of food production, adding to the hungry in the rural areas and the slums of the big cities. The few that remain will work under full control of the transnational companies as workers or contract farmers. This is the very model that the World Bank and the AGRA (Alliance for a Green Revolution in Africa) initiative are trying to impose with the funds they have designated to resolve the food crisis.

The solution exists: food sovereignty
Contrary to the impression that is given by confused officials, a solution to the crisis exists nd is easy to implement if there is sufficient political will. Peasant based agriculture and ivestock raising and artisanal fisheries can easily provide enough food once these small-
scale food producers can get access to land and aquatic resources and can produce for table local and domestic markets. This model produces far more food per hectare than the orporate model, enables people to produce their own food and guarantees stable supply. In June 2008 during the High Level Conference on the food and climate crisis, organized by AO (Food and Agriculture Organisation of the United Nations), many concrete proposals ere made by peoples’ organisations and other non-governmental organisations in a declaration “No More Failures-as-Usual” that was supported by over 800 organisations.

The declaration called on governments to:
– Reinstate the right of governments to intervene and regulate in the food and agricultural sector in order achieve food sovereignty.
– Reject Green Revolution models. Industrialized agriculture and fisheries are no solution. This view was clearly supported by the broad based international assessment.
–   Prioritize the participation small scale farmers, pastoralists and fisherfolk in the formulation of policies,
–   Make Food sovereignty and the right to food prevail over trade agreements and other international policies.
–   Restructure United Nations (UN) agencies involved in food and agriculture to make them more effective.

Governments at the Madrid Meeting have yet to take these demands into account.

No effective response so far
Since the earlier food crisis in the 1970s, many initiatives have been taken to tackle the food risis. In the seventies, a so-called World Food Council was set up to tackle the crisis. The ouncil never functioned and was in the end abolished in the nineties. In 2002 the international Alliance Against Hunger was adopted by the FAO World Food Summit: five  years later but it is totally ineffective. At the moment France and other G8 countries and Spain are proposing a “Global partnership”. This initiative will generate more fragmentation and provide more of the same wrong recipes. For the first time in the UN, this ‘partnership’ would give Transnational
Companies (TNCs) and the big foundations such as the Bill Gates Foundations an official seat at the table.

Last year, a UN-High Level Task Force was set up to coordinate actions of the UN agencies, the Bretton Woods Institutions and the WTO, and a Common Framework for Action (CFA) was developed. Although increased coordination between UN agencies is desperately needed, the Task Force is mainly driven by the G8 donor countries and Multilateral Institutions like the World Bank, the WTO and the IMF. The CFA was written by the international bureaucracy without any serious consultation of governments and civil society. Although support for small farmers is mentioned in the text, the interests of the multilateral institutions and the G8 countries dominate. The text clearly pushes for more trade liberalisation and the World Bank wants to use this mechanism to channel big funding to agribusinesses for a second green revolution, particularly in Africa. The FAO and other UN agencies, that have a mandate and the expertise to implement effective programs, are isolated and marginalized.

Where is the political will to address the crisis in a serious way?

The show in Madrid orchestrated by Jeffrey Sachs and the Spanish government that includes some “panels with Civil Society” presents itself as a total sham. By way of preparation for the meeting, the Spanish government presented a proposal for a “Global Partnership”, in which “the voices of the poor shall be enhanced, heard and taken into account in the whole process”, but the way the Madrid meeting is set up hardly reflects this commitment. One or wo peasant representatives may perhaps speak a few minutes from the floor while transnational companies such as Monsanto and the Bill Gates Foundation, the WTO, World Bank and the IMF sit on the podium! In the midst of the present financial crisis when banks go bankrupt one after the other primarily due to excessive gambling, it is absurd to ask banks and financial institutions to solve the food crisis. The principle of “one dollar – one vote” that the World Bank and the donor countries are trying to introduce has to be rejected.

No serious effort has been made to bring representatives of peasant farmers, fisherfolk, indigenous people and urban organisations that represent affected people to the table. Once again, the main stakeholders in the debate on the food crisis have been completely sidelined. Only some hand picked NGOs are asked to give their opinion. This event just serves to push through initiatives that lack any legitimacy and will again be totally ineffective or may even make things even worse!

Policies based on food sovereignty are desperately needed

National governments have to take up their responsibility and urgently implement the following measures:
– Bring the disastrous volatility of food prices in domestic markets to a standstill. National governments should take full control over the import and export of food in order to stabilize local markets.
– Set up policies to actively support peasant-based food production and artisanal fishing, local markets and the implementation of agrarian and aquatic reform. Peasant based production, based on agroecology, has proved to be more effective: it produces more food per hectare and gives work (and access to food) to many more people)°  .
– Stop corporate land grabbing for industrial agro-fuels and food production.

The UN agencies have to support the initiatives of national governments and forbid the WTO, World Bank and the IMF from interfering in national policies regarding food and agriculture. The WTO, WB and IMF should therefore be excluded from implementation of the proposals of the UN Task Force.

No more new structures and initiatives!

We protest vigorously against this circus of the ongoing creation of new structures and spaces. They are bound to fail again and again as they undermine existing bodies yet continue to implement the same bad policies. The space where the issue of food is discussed at the international level used to be concentrated in one agency, the FAO. This space has been fragmented, since the last food crisis, into many different institutions that all have their say over food and agriculture: FAO, International Fund for Agricultural Development (IFAD), the World Food Program (WFP), the Consultative Group on International Agricultural Research (CGIAR), WTO, WB, IMF, etc. On top of this, exactly those who bear the heaviest responsibility for this crisis (WTO, WB and IMF) will dominate the new structures.

One single space in the UN system needed

Until now UN agencies (FAO, IFAD, WFP) as well as the CGIAR have dramatically failed to address the crisis in an effective way due to lack of funding, inefficient functioning and lack of focus on support for peasant and fisher based domestic food production. This has to change. The global governance of agriculture and food has to be dramatically improved. We need one single space in the UN system that acts in total independence of the WTO, the WB and the IMF, with a clear mandate from governments, a decisive participation of peasant, fisherfolk and other Civil Society Organisations and a transparent and democratic process of decision making. This has to be the unique space where food and agriculture issues are discussed, where policies and rules are set and where all financial resources are controlled. Donor countries should show the same commitment to the financial crisis as to the food crisis and commit the necessary funding to the UN agencies to really tackle the issue. Of the US$24billion promised at the Rome Conference in June 2008, only a small part has been provided.

Funding to solve the food crisis is important. But we don’t want this money to be spent on providing more high tech seeds, more chemical fertilizer and more of the same old recipes that have already failed in the past, as is happening now. We want support for a true re-orientation of the global food system towards food sovereignty.
————————————————————————–
)° see www.foodfirst.org/en/node/246
)° see more concrete proposals in the declaration “No more failures as usual” published at the occasion of the FAO High Level Conference, June 2008, and supported by over 800 organisations (www.nyeleni.eu/foodemergency
)° see http://www.agassessment.org , this is the so-called International Assessment of Agricultural Knowledge, Science and Technology for Development (IAASTD)