Home » A handful of countries legitimising claims made by agro-industry, diminishing the rights of people to seeds

Press Release from La Via Campesina

Privatising agricultural biodiversity, deregulating access, monopolising control, appropriating peasant seeds and animal breeds; a handful of countries are trying to legitimise the claims made by agro-industry and diminish the rights of people to seed

The Subsidiary Body of the Convention on Biological Diversity is responsible for giving scientific, technical, and technological advice. However, throughout the week of negotiations, the neoliberal government delegations intervened in a way that was solely political and completely lacking in the ‘scientific basis’ that is called for.

Hearing the governments from Europe, Brazil, Argentina1, echoing the exact arguments as put forth by oligopolistic agro-industry, was indeed a demonstration of their collusion with the boards of directors/management of agro-industrial corporations.

On numerous occasions, these countries tried to weaken the legal framework of the Convention itself; they called into question the requirement to obtain free, prior and informed consent of indigenous peoples and local communities. They repeatedly insisted on the supremacy of national law in relation to the obligatory nature of the Convention on Biodiversity (CBD). Should we therefore conclude that the international commitments made by these countries, within the framework of the United Nations, have no value?

Further, they prevented the SBSTTA from making any clear decision with regard to SYNTHETIC BIOLOGY. There were week-long discussions to ascertain if it was preferable to allow the spread of organisms created through gene drives so as to test their effects , or if it would be wiser to declare a moratorium.

At a time when the scientific community is sounding the alarm on the collapse of biodiversity, these countries are supporting the dissemination of organisms that have been created to cause the disappearance from the Earth of varieties, breeds, and even entire species.

If we do not prohibit biological weapons of this sort, how can we prevent these being used for the large scale destruction of plants and animals selected by peasants to be replaced by those that are owned by industry. This could be a means of causing famine in a country that is resisting imperialist domination or wiping out populations who do not conform?

It will mean the only genetic material available must be bought – feeding the agro-industrial mission to create/control more genetic populations. The only decision that could be reached was to propose that the work of the Cartagena Protocol’s “Technical Expert Group on Risk Assessment” be prolonged. Meanwhile, countries continue to play with fire, disseminating these biodiversity-destroying organisms without oversight or accountability.

Another example of anti-democratic obstruction of the work of SBSTTA is the lack of a decision on the topic of “DIGITAL SEQUENCE INFORMATION ON GENETIC RESOURCES”. Throughout the week, the same ultra neo-liberal countries maintained that dematerialised genetic information has nothing to do with the physical genetic resources from which it is derived, yet the protection of their patents on this same genetic information, also extends to the plants and animals containing the information!

All week long, countries – such as Bolivia, Morocco, and Rwanda – that defended the principles of the Nagoya Protocol – were bombarded with repeated assertions that those very principles should be nullified. 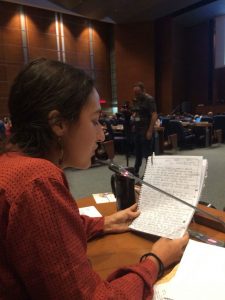 “Another major debate during the week involved whether or not the CBD should concern itself with the new Genetically Modified Organisms (GMO) derived from ‘gene editing’. Many countries took the same position as La Via Campesina on this subject; they wanted gene editing to come under the responsibility of the CBD, so that this technology would be subject to international measures and regulations in the same way as earlier GMOs. Other countries, like the members of the European Union, Brazil, and Canada argued vehemently against the inclusion of ‘gene editing’ and ‘gene drives’ within the CBD’s sphere of competence, thus hoping in to avoid regulation of their use,” stated Geneviève Lalumière, a Canadian peasant farmer who intervened on behalf of La Via Campesina.

The CBD was ineffective and resulted in a stalemate. Many stakeholders are not considered in these negotiations. This was marked by the fact that, since there is no procedural recognition of peasant organisations within the CBD process, it was impossible for the La Via Campesina delegation to take part in formal and structured discussions with government delegations.

In November 2018, at the next meeting of the Conference of Parties (COP) in Egypt, we will continue to demand that agricultural biodiversity, whether or not it is immaterial or dematerialised, be controlled by peasants, by local communities, and by indigenous peoples for a biosecure and sustainable future.

For further information and interviews with the LVC Delegation, contact:

1 The USA has not ratified the CBD and therefore does not take part in its discussions.