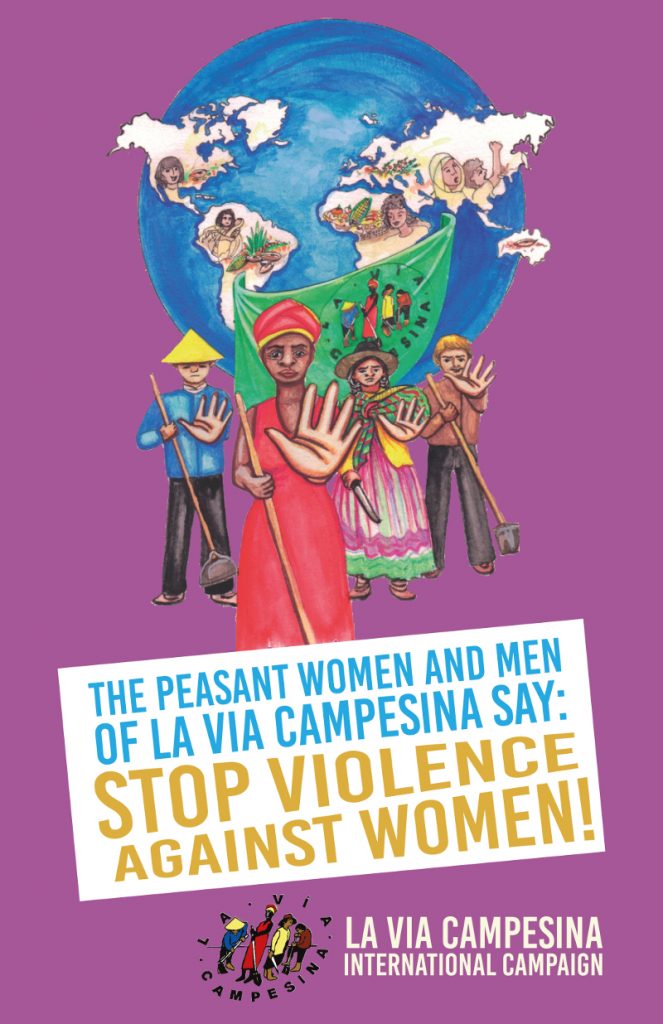 We the peasant women of La Via Campesina coming from Americas, Africa, Europe and Asia and assembled here in Negombo, Srilanka this week for the Global Meeting of Women Articulation, unanimously condemn all forms of violence and discrimination against women and girls everywhere.

We say this while we realise that much remains to be done – to ensure that the violence that has occurred and is still occurring today in our countries, in our homes, in our organizations, rooted in patriarchy, taking the form of rape and commodification of women, is erased from our society, our territories, our bodies and lives.

On this 25th of November and every day, the peasants of La Via Campesina say:

“Let us put an end to violence against women, break the silence, resist and confront patriarchy and capitalism. We are against all types of violence that still affect many women in rural and urban areas. We must overcome barbarism, fascism and the lack of respect for the most fundamental rights. We must fight today and every day as a working class. We understand that capitalism is the main source of inequality and that many forms of violence emerge from these inequalities. That is why this struggle is such a class struggle.

Our proposal and our tools for transformation come from the land in which we women are anchored. It comes from the land cultivated in agroecology to achieve food sovereignty; from the collective research we carry out for the construction of equality in our spaces of action and study; from the marches and struggles in which, women participate to build the NEW WOMAN AND THE NEW MAN that will build the new society.

It is clear to us that the only way to end machismo is to confront oppression and exploitation and that only women and men organized in our popular, peasant, urban, fishing and forest peoples’ movements can carry out this struggle for the construction of equality.

We peasants of the world of Via Campesina, present in the 81 countries of the world, say YES to equality, and END to violence against women. We want and commit ourselves daily to building a life without violence, discrimination and exploitation against women.

The society we want is free of violence against women!

You can also tag us on