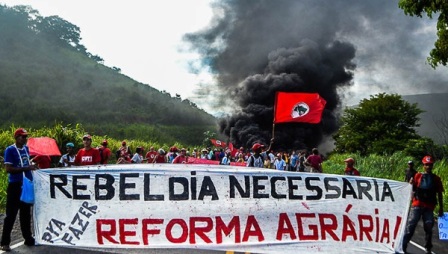 (Porto Alegre, Brazil, March 11, 2015) Thousands of activists, including members from the Brazilian Landless Workers Movement (MST) staged demonstrations in the Brazilian city of Porto Alegre on Wednesday demanding the implementation of land reform, food sovereignty and the creation of public policies for small-scale agricultural producers.

“Within this national round of mobilizations, with the small farmers’ movements throughout the state, our goal is to once again put agrarian reform on the national agenda and to demand the construction of a program for the production of healthy food for the nourishment of the Brazilian people,” explained the national coordinator of Via Campesina, Cedenir de Oliveira.

The protests, which began Monday to mark the National Day of Women Farmers, have taken place across 21 states in Brazil, with over 20,000 demonstrators nationwide, according to the MST website. Via Campesina, an international network of peasants, landless, women farmers and rural youth, jointly called for the demonstrations with the MST.

Throughout the month of March, representatives from various social movements will hold protests to denounce the current model of industrial agricultural farming being carried out throughout the country.

“This year we will have the support of urban social movements and trade unions that will mobilize for workers’ rights and political reforms,” MST national coordinator Debora Nunes stated.

According to government data, small farmers make up 33 per cent of the Gross Domestic Product of Brazilian agriculture and occupy 74 per cent of the rural workforce. Yet, small-scale farms only receive 25 per cent of total public spending in comparison to large-scale agriculture, which receives 75 per cent.

Brazilian law defines a small farmer as someone who owns land between 5-110 acres of land, depending on the location – using predominantly labor of his or her own family, and whose main source of income is linked to agricultural activities.

Protests will likely continue into April due to the observance of ‘Red April,’ marking the anniversary of the April 1996 massacre in which 19 MST activists were killed in the Brazilian state of Para