Home » 18 years of the WTO is enough: Trade rules have favored TNCs and deepened poverty 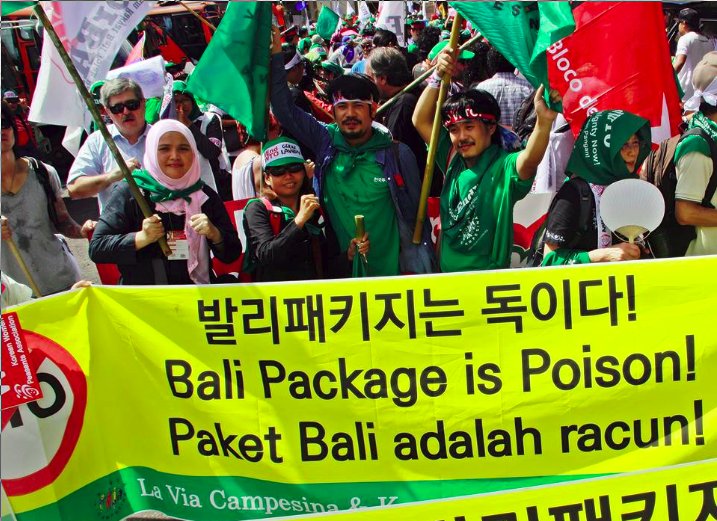 (Bali, Dec 3, 2013) As the official World Trade Organization (WTO) negotiations opened today on the 3rd of December in Bali, Indonesia, peoples’ movements took to the streets. Gerak Lawan, an alliance of Indonesian Peoples Movements against Neocolonialism and Imperialism, along with the Social Movements for an Alternative Asia (SMAA), a newly formed coordination of Asian social movements along with La Via Campesina demonstrated in Renon Square in Denpasar from 9am until 2pm.

The protest brought together at least 1,000 farmers, trade unions, students, women and youth from more than 30 countries. They called for the total rejection of the WTO and the free trade regime.

“The Bali package is a terrible deal for the developing world. We are forced to accept a legally binding agreement on trade facilitation in exchange for leaving the small farmers hungry.

We reiterate our call for the WTO to get out of Agriculture” said Yoon Geum Soon, member of the International Coordinating Committee of La Via Campesina, a global peasants movement with over 200 million members in the world.

“We don’t want to get into discussions on whether the peace clause should be for 4 years or 10 years, the point is that the WTO is doing nothing for the farmers, in the long run it spells death for us. Indian farmers will never accept such a deal,” said Yudhvir Singh of BKU, the largest farmers union in India.

The peaceful demonstrations also cited the failure of the WTO. After 18 years, the WTO delivered only development for Transnational Corporations (TNCs). According to the 2013 World Investment Report by the UNCTAD, “Transnational Corporations coordinated Global Value Chains account for some 80% of global trade.” The rules of free trade have deepened the concentration of wealth in fewer and fewer hands.

Pablo Solon, former Bolivian Ambassador to the United Nations, now Executive Director of Focus on the Global South says, “It is clear that the Bali Package is a way to revive the WTO in order for it to find new ways of growing global trade. But this will only lead to the further overexploitation of finite resources and the concentration of wealth in fewer hands.”

Social movements are calling for not only the rejection of the Bali Package, but of the WTO and the whole free trade regime. Lidy Nacpil of Jubilee South states, “18 years of the WTO has been more than enough. What we need is alternatives to free trade and a system that is based on Economic Justice. “