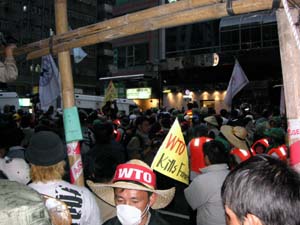 What stands out about the action in Hong Kong around the 6th Ministerial Meeting of the WTO, that draws to a close today, has been the creativity of the mobilizations of pacific resistance, where culture and its different expressions have been a meeting point for the thousands of delegates from all around the planet.

But yesterday, December 17, the police of Hong Kong violently interrupted the massive pacific march, organized by the Via Campesina international farmers’ movement to express its position with regards to the WTO agenda.  The result was 70 people injured and more than 500 arrested.

Thousands of troops occupied the city in record time.   They violently repressed the demonstrators, and surrounded the group of farmers that had managed to arrive practically at the very entrance of the venue where the Ministerial Meeting was taking place, and then took them to a local prison “specially” prepared for the occasion.

In a estimated proportion of ten uniformed officers for each demonstrator in this zone, and three in the surrounding area, the Via Campesina will demonstrate again today, because as Josie Riffaud of the International Coordinating Committee of the organization explains, “the farmer movement, which is not part of the spheres of the WTO nor is consulted by it, has no other means of making its voice heard and expressing its desperation, at the imminent extermination of its way of life, that is resulting from decisions taken in meetings like this one.”

Indeed, the pressure to compete, in prices, technologies and types of products, with the large corporations or national agri-business, pushes the peasantry ever further towards indebtedness, bankruptcy, emigration and even to suicide – especially in Asia -.  The possible disappearance of the farmer way of life, so as to convert the countryside into a huge industry (as is already happening in many countries) places the peasantry in a situation of life or death, or, as Korean Yoon Geum Soon emphasizes, “… of permanent resistance and struggle, especially against the WTO, that is the author of a version of the world without peasant farmers”.

The problems for agriculture, then, are much deeper than mere questions of competition in the market, subsidies or the sale of any particular product; they have to do with an orientation and design of the world set down by the market, whose outlines do not leave space for small farmers.

With the participation of more than two thousand delegates, coming from all parts of the world, in Hong Kong the Via Campesina has been organizing a full agenda, that includes debates, reflections, mobilizations, cultural events and various activities of awareness-raising among the local population. Obviously all of this is taking place in a venue of their own, separate from that of the Ministerial Meeting, to which not only have they not been invited, but from which they are being repelled.