“Annual meeting in Bali this week is just a sham to cover up their criminal negligence of people’s interests,” say peasants. 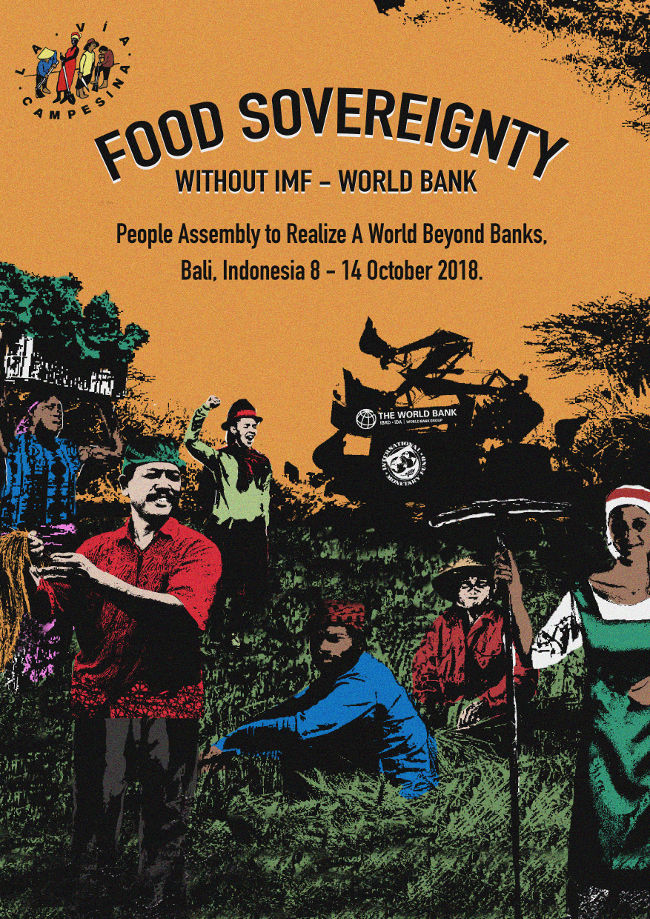 07 OCTOBER, BALI: At a meeting of La Via Campesina facilitated by Serikat Petani Indonesia (SPI) in Bali, peasant organisations from Asia, Africa, Americas and Europe have unanimously held World Bank and IMF responsible for facilitating large scale land grab, deforestation and ocean grabbing around the world, which has led to inequality, poverty and global hunger. Peasants pointed to several decades of neo-liberal push from World Bank and IMF for privatisation and de-regulation in developing countries, as among the major factors that has led to increased cost of living for peasant communities.

Over the last 30-40 years the World Bank and the International Monetary Fund (IMF) and more recently the WTO have forced countries to decrease investment in food production and to reduce support for peasant and small farmers.Under neo-liberal policies, state managed food reserves have been considered too expensive and governments have been forced to reduce and privatize them under structural adjustment regimes.

Representatives from countries such as Timor Leste, Thailand, Kenya, Cambodia, Malaysia, France, Indonesia, South Korea, India, Nepal and Sri Lanka have cited several instances of large scale land grab in their countries, to facilitate massive infrastructural projects that are funded by the World Bank and IMF.

David Calleb Otieno from Kenyan Peasants League said, “In Kenya recently, IMF pushed for the enactment of Finance ACT 2018 that has increased tax on fuels, mobile money transfer, and repealed the interest rate law. The intention is to benefit Kenyan creditors to continue earning from Kenya’s servicing of the debts at the expense of the well being of Kenyan people. There is a freeze on welfare spending in Kenya. Kenyan Debt to GDP ratio now stands at almost 70% of the GDP. Caught in this debt trap, almost everything is being privatised – transport, water, telecommunication. Peasants have lost their autonomy over seeds and our agricultural policies are pushed towards incentivising cultivation of cash crops. All these policies are being pushed at the behest of IMF and World Bank.”

Ms Jeongyeol Kim from Korean Women Peasants’ Association added, “South Korea has signed trade agreements with 52 countries and these agreements guide how agricultural policies are framed in the country. There has been a consistent drive to turn away from peasant agriculture and adopt an export-oriented agribusiness model. This has led to increase in rural debt and a complete destruction of peasant livelihoods. Peasant women face the worst of this industrial model, that is heavy on use of chemical inputs. This shift in the way we do agriculture came about largely due to conditions put forth by IMF and World Bank while giving loans.”

Baramee Chairayat from Assembly of the Poor, Thailand said “The National Development Plan in Thailand always had the blessing of World Bank and it meant that agricultural land and public forests were being diverted to make way for massive highways, large agribusiness plantations and sugar cane factories. Over a period of four decades much of rural Thailand has become landless. They have enacted laws that alienated indigenous peoples from their forest.”

Claude Girod from Confederation Paysanne, France, the massive drive for industrialisation and agribusiness in African continent, coming as a result of conditional loans extended by World Bank and IMF have led to inescapable debt traps resulting in conflicts, wars and mass migration.”

“World Bank and IMF have, in the name of Structural Adjustment Programme, pushed for financialisation and privatisation of natural resources in Indonesia. When people resist these land grabs – taking place whether in the name of REDD+ or any other such programs – peasants are attacked, jailed and criminalised. We have the most recent case of Ahmad Azhari, who was kept in prison for nearly 9 months for defending the rights of peasants. All these institutions are here to help corporations expand their businesses rather than lifting people out of poverty”, said Zainal Arifin Fuad, national peasant leader from Serikat Petani Indonesia (SPI)

“There is also a danger of co-option and appropriation. If you take the case of agrarian reform there have been several instances where World Bank and IMF also tries to speak the language of the peasant struggle by supporting agrarian reform, but those are in fact market-linked or market assisted forms of agrarian reform, which is not what peasant communities want”, added Zainal

The peasant organisations have pledged to expose the incriminating role of World Bank and IMF in increasing inequality, land dispossession and poverty, even as the annual meeting of these bodies are under way this week in Bali, starting from 08 October.

La Via Campesina denounces the impunity with which these destructive policies are pushed forth by World Bank and IMF. We will continue our campaign for realising food sovereignty and freeing agriculture from trade negotiations.