Home » Women’s Struggle: for Food Sovereignty; against violence and agribusiness 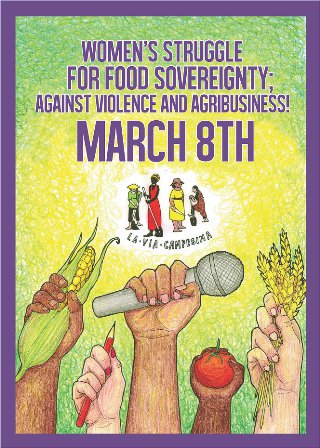 (Harare, March 8th, 2015) Today, March 8th, International Women’s Day, the Via Campesina calls for the coordination of actions to highlight the fundamental role played by women in guaranteeing Food Sovereignty – not only as a means of confronting the food crisis but as an essential ethical principle that has as its basis social justice and equality. On this day of struggle, we denounce the prevailing violence, against women specifically, because the agribusiness model and capitalist interests in the countryside have exacerbated social and gender inequalities.

It is in this way that we struggle against patriarchy, which affects all aspects of our lives within our families, our organisations and communities and all that has to do with our gender and our sexuality. We also express our condemnation of feminicide, the murder of millions of girl children and women in all parts of the world, and we stand in solidarity with all the people who suffer discrimination and violence because of their gender and/or sexual identity.

The role of women in the Via Campesina is part of what makes this movement unique, both in the history of peasant and farmer movements and among other social movements and international organisations.

In the present context, land-grabbing, dispossession, and exploitation by transnationals are increasing with the expansionist model of agribusiness, and there is a corresponding increase in the vulnerability of women peasant and indigenous women who every day face expulsion from their land.

In the light of the foregoing,  the Via Campesina affirms the necessity of an International Convention on the Rights of Women and Men Peasants. The existing international mechanisms and conventions have proved to be limited, both with regard to the protection of the rights of peasants and small-scale farmers and to the consequences of neo-liberal policies.

On this International Day of March 8th, we, women and men of the Via Campesina are defending comprehensive land reform and the natural goods – land, water, and territory – that together guarantee food sovereignty through agroecological production and a renewed awareness of the value of peasant and small-scale agriculture. For this reason, we strongly decry the destruction and depredation resulting from monoculture and the indiscriminate use of toxic chemical inputs and from the harmful effects of the activities of the transnationals in our territories. Greater profitability and productivity in the countryside means a decline in decent living conditions for millions of women and men peasants and small-scale farmers. The market cannot continue to dictate agricultural policies and to damage the health of people and of nature.

On this March 8th, 2015, we will continue to globalize our struggle and to globalize hope for a fairer and more egalitarian world for all women and men. We stand in solidarity with the Peruvian indigenous peasant woman Máxima Acuña in her struggle of resistance to a transnational mining company. Her strength and her dignity are a source of inspiration, enabling us to say: We want an end to the capitalist patriarchal system.

See more on the following links: