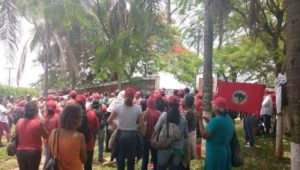 The women of MST released a public statement saying that they continue to fight “against machismo and violence against women and LGBTs.”

Brazil’s Landless Workers’ Movement marked this year’s International Day for the Elimination of Violence against Women by occupying a farm owned by Dr. Roger Abdelmassih, condemned in 2010 to 278 years in prison for raping 39 women, most of whom were his patients.

The women of MST released a public statement saying that they “continue to fight for the right to land and for agrarian reform policies; against machismo and violence against women and LGBTs; and against the culture of rape.” The occupation took place in Avare in the interior of the state of Sao Paulo.

Apart from being a medical doctor, Abdelmassih was the owner of 18 orange farms for his company Agropecuario Sovikajumi, according to Revista Forum. He’s also the father-in-law of Jose Luiz Cutrale, one of the largest orange juice exporters in the world.

Since 2009, MST has denounced and occupied farms owned by Cutrale, who’s orange juice company bears the same name, for illegally invading public property in the regions of Laras, Agudos and Borebi, according to Revista Forum.

The civil police monitoring of Abdelmassih’s farm in Avare, coupled with documents found on the premises, helped lead to his whereabouts in Paraguay where he had fled after being sentenced. Almost three and a half years later, agents from Brazil’s Federal Police as well as Paraguay’s National Antidrug Secretariat finally caught up with Abdelmassih in an Asuncion restaurant.

Ten days prior to his detention, police had monitored the former doctor at his 600 square meter residence in the Paraguayan capital. The home included four rooms, a jacuzzi, swimming pool, sauna, barbecue pit, a personal cook and other residential employees.

The 18th anniversary of the International Day for the Elimination of Violence Against Women was marked by grassroots organizations worldwide marching and launching social media campaigns to call attention and demand an end to violence perpetrated against women.