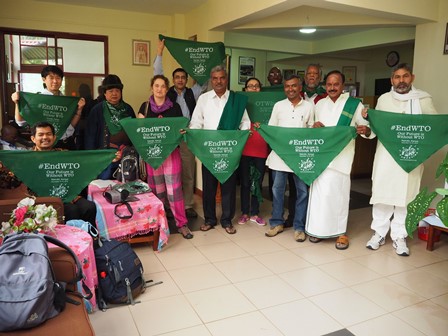 (Nairobi, December 15, 2015) After many years of ignoring African challenges posed by global trading system, the WTO- one of the principal instruments of global economic governance- comes to the continent to seek legitimacy. The WTO is trying to reinvent itself to appear as if it cares about Africa and has solutions to a myriad of problems (increasing poverty, unemployment and underemployment, collapse of social institutions, etc). African economies most of which are agro-based were ruined by the WTO which promotes developed countries and transnational corporations.

By hosting the 10th ministerial meeting, Kenya thinks it will increase its income from tourism and foreign investments in other economic sectors. It tries to hoodwink other African governments to embrace WTO. Kenyan government seems to have taken the WTO bait. Kenya and Africa should not be hoodwinked but pull out of the WTO. If they don’t, the only real deal they will get is a raw deal to further kill their economies, peasants, consumers, industries and livelihoods.

In Nairobi, most negotiations by African governments are market driven, not driven by urge to protect local farmers and consumers. They should learn from the African Cotton 4 (C-4) countries whose economies have been destroyed by American distorting subsidies on cotton. Their issue has been before the WTO since 2002 and nothing has been done to punish the US for trade distortion up to now. Instead the US has offered them development aid to further ruin their agriculture through forcing them to purchase toxic agro-chemicals and GMOs to increase “agricultural productivity”. Such US hypocrisy must be condemned and cannot be allowed at Nairobi MC10. It undermines countries’ constitutions by imposing rules which compromises their policy space, human rights and deny FOOD SOVEREIGNTY.

La Via Campesina and its partners (World March of Women Kenya, Center for Constitution Implementation, Dandora Must Change and Bunge la Mwananchi) are meeting in Nairobi under the banner “#EndWTO”. We call for FOOD SOVEREIGNTY as the peoples’ alternative to the corporate driven free trade regime of the WTO.