Home » “Without the land we cannot live” 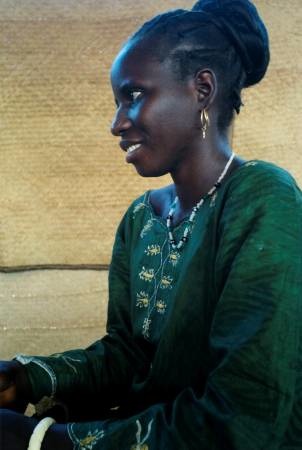 Sélingué, Mali – 19 November 2011 – My name is Maria Luiza Agusta Clodé. I am 35 years old and I am from a small village called Pelando in the Cacheu region of the Canchungo province in Guinea Bassau. I am member of the association Grupo Juro, that is part of the platform of the Associations and organisations of Guinea Bissau (QNCOCPA – Quadro Nacional de concertação des organisaçoĕs Camponesas e productoras agricolas). The name of my association: Grupo Juro means “to promise, to give your word, to resist and stand firm”.

I am a peasant and I have a small production of rice, potatoes and cassava. I also have some animals, such as goats, sheep and chickens. I farm to feed my family and then I sell part of what I produce in the local area. Keeping animals is really important for us – it is our “bank” and wealth- our animals are our investment and every time we need to buy something we sell an animal. The way I produce is quite basic, I do not have a plough or a tractor, as we do not have a lot of money or support.

It is the first time that I have participated in an international forum and it is very interesting for me. During these few days, we – farmers – have exchanged our experiences and I have had the possibility to understand the different problems we are facing. What I have understood is that the situation of land-grabbing is slightly different in every country but the consequences are always the same.

I would like to tell you my personal experience. According to the law in Guinea Bissau the land belongs to those who work it . Unfortunately this is not completely true, as generally the State take it back whenever they want without asking for permission.

My family and I – we are 7 persons in total – used to have a nice field, and close by the land there was an old disused road. One day the state arrived and decided to renovate the road, but it was in such a bad state that they decided to build a new road just trough our field. And they started doing it without telling us anything! The tractor came and destroyed everything. So I decided to do something, I went there and sat down on the tractor. I stayed there for one week with the support of other two or three people. I told them, “you can kill me but I am not going to move from here”. The authorities came to talk to me and to dissuade me to stay there, arguing that the land belonged to the state and that there was no alternative. Finally I had to give up, so they finished the road and completely destroyed our field, without any compensation and without asking before for our consent.

Just now before I came to this conference, the State went to my village and started fencing a field nearby that is cultivated collectively…We discovered that they wanted to build a school, but again we were not informed before. At the start the village struggled against this decision, but finally they gave up.

There are some private investors that are buying land in Guinea Bissau as well. Often the farmers sell their land, firstly because they are not informed and secondly because they are poor and need money. Land-grabbing by big TNCs is not still so visible in my country, it exists but is not so perceptible. Guinea Bissau is one of the poorest countries in the world, and this is why perhaps land-grabbing has started before in countries that are richer than Guinea in natural resources, such as Mali or Madagascar. It will soon arrive in Guinea Bissau as well, and it is a big risk as most of the people in the rural areas are not educated or informed and civil society is really fragile. Most of the society will think that it is a positive thing and only a minority group will oppose this phenomenon. And this can create or exacerbate already existing conflicts as well, as the villages are close by one another and disagreement can create enormous conflicts between them.

In this meeting I have discovered that the situation of women in relation to access to the land is really similar in many countries in Africa, and this worries me a lot. What can we – women – do to have access to land? I am lucky as my family has given me part of the land to work, but normally is not like that, it depends a lot on the community to which your family belongs.

Without the land we cannot live. Land is our wealth, I remember that when I was a child, my father grew potatoes and eventually he was able to buy seven cows. If they leave us working the land as our fathers and grandfathers did, we will have the same chance. In our house we do not eat food coming from other places. For example, we do not eat the rice “of the State” (which is imported rice), so we are actually living food sovereignty. It is true that we still work the land manually, but we cannot afford to buy any machines. This is why we set a group as well, so we can share the work between us when there are big jobs to be done in the field, and we can pay a little to the people that come to help us. The group always cultivates part of the land collectively and every year the president of the association gives the group a field which could be from his/her land, my land, or some other family.