Home » We need our countries to stand united FOR our rights, says Ramona Duminicioiu 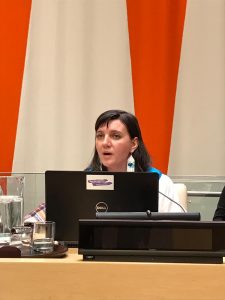 Oral Statement of La Via Campesina at the Side Event on the Declaration for the Rights of Peasants and Other People Working in Rural Areas, New York, United Nations, 14 November 2018

Introduction
Many thanks to all the country delegates present here from all the regions. I am a peasant from Romania, in the Eastern part of Europe. I will speak on behalf of La Via Campesina, the global peasant movement, for peasants and people working in rural areas living in the global north, in Eastern and Western Europe, as well as in other regions of this hemisphere. We would first like to thank all the countries for their work and for bringing us closer to the final stage of the peasant rights declaration process and we praise the very transparent and inclusive process, thanks to the efforts made by Bolivia.

We congratulate Europe, Western and Eastern Europe alike but also other countries of the North, for coming so far and for going so deep into the process with comments and analysis. Their participation in the debate is showing that these regions understand the importance of this Declaration and the need to safeguard the future of dozens of millions of peasants and rural workers from the Northern hemisphere.
We still have a rich peasant culture in this part of the world, but affected by poverty, with a shrinking space on the market or marginalized into an invisible economy, affected by massive economic migration, displaced or transformed by urbanization, with less and less opportunity for development, reducing the number of small family farms in certain regions, to a degree that makes it inaccessible for young small family farmers and pose potentially irreversible risks on food security. We produce food, feed our communities and our countries, facing systemic and systematic discrimination, unfair market practices, abuse, extreme labour exploitation and land grabbing. This declaration comes at the right time to fill the gaps of insufficient instruments that could protect and promote the rights of the vulnerable and affected communities of peasants and people working in rural areas. We, peasants, are a pillar of strength and we can be a driving force in a modern society, provided that our rights are recognized and respected, particularly the protection of social security, rights to means and methods of production, access to natural resources, recognition of traditional knowledge, the right to seeds, the right to land. Public policies need a stronger human rights approach and complementary instruments. We need to put the proliferation of human rights violations to the past, where they belong and we need to put human values in human rights.

Further arguments
The Declaration is built on existing rights and please allow me to give you just 3 examples of negotiated instruments that are at the basis of some of the most important rights elaborated in this Declaration: The Right to Food – which provided the general frame of the Declaration, the Voluntary Guidelines on the responsible governance of tenure of land, fisheries and forests in the context of national food security – which provides the basis for the Right to Land and the International Treaty on Plant Genetic Resources for Food and Agriculture – which is the substantial base of the Right to Seeds. Along the process, many experts have put together important analysis and studies, showing the coherence and consistency of the Declaration with other international instruments. But let me give you also my perspective as a seed producer.

This Declaration has the potential to contribute to facing the rising migrant crisis and once adopted, it can help to build more opportunities for young people in rural areas. Moreover, the Declaration would provide us with a necessary tool for contributing effectively to peace and development in our region, as peasant families are the first line of victims affected by conflicts.

Supporting the Declaration would be consistent with the United Nations Decade of Family Farming (2019-2028) – resolution / adopted by the General Assembly, supported by an overwhelming majority of the UN countries, during the 72nd session of the UN General Assembly.

The Declaration serves not only farmers but also rural communities and consumers, given its holistic approach and the fact that peasants produce public services by feeding citizens from the urban areas and maintaining natural resources in a sustainable manner.

The Declaration provides a positive frame and long-term guarantee for future development for sustainable and economically viable agriculture. The small-scale model of production – promoted by the Declaration – is the basis of quality food, creates the majority of rural employment and manages natural resources in a sustainable way, responding to the climate change challenge, in an interconnected world.
Many international institutions, including European Union institutions, have worked very hard in this process and also there was great work done at the country level. I would name here the support of the European Parliament who adopted an important resolution (2017/2206(INI)) on 3rd of July 2018, calling for the EU and its Member States to support and vote in favour of the Declaration. A similar resolution was also adopted by the European Economic and Social Council, in February 2018. The Special Rapporteur for the Right to Food – Hilal Elver, showed constant support at all levels of the process and we extend also our gratitude to FAO Director-General José Graziano da Silva, the regional FAO offices and also the FAO offices in Rome, Geneva and New York, for the tremendous support and arguments that link the Declaration with the realization of the Agenda2030 and the Sustainable Development Goals.

Closing argument
So far we have witnessed a great diversity of positions in Eastern and Western Europe, as well as in other regions of the Northern hemisphere, with various opinions and discourses. We need our countries to stand united FOR our rights, we believe in you, as your role is important for us. A vote in favour would send a clear and needed positive message towards the rural communities of the entire world. We peasants and people who work in rural areas are important for the world. Please vote in favour of this declaration and join the rest of the world in building a better future for us peasants, who have been feeding the world and wish to continue to do so for the next generations!

For further information, you can contact Ramona Duminicioiu at ramona@eurovia.org /+40 746 337 022